WNBA Players Dispute Candice Wiggins' Claims She Was Bullied For Being Straight - uSports.org 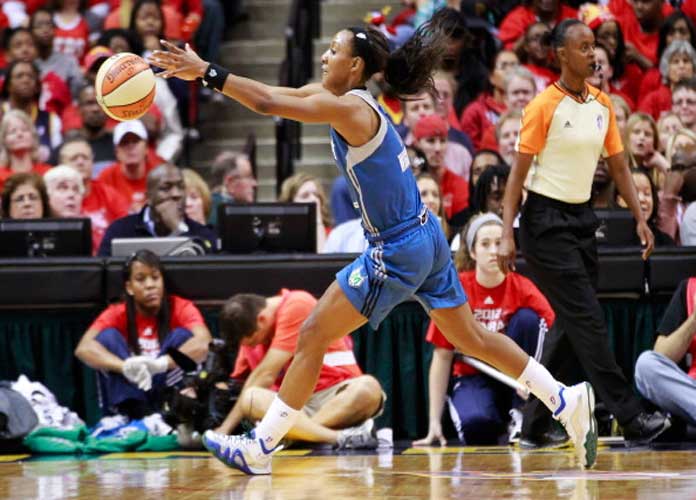 INDIANAPOLIS, IN - OCTOBER 19: Candice Wiggins #11 of the Minnesota Lynx reaches for a loose ball against the Indiana Fever during Game Three of the 2012 WNBA Finals on October 19, 2012 at Bankers Life Fieldhouse in Indianapolis, Indiana.

When Candice Wiggins retired from the WNBA in March 2016, she initially cited both physical strain and the fact that she didn’t really love the game anymore as her reasons.

However, in comments she made to the San Diego Union-Tribune on Monday, the 30-year-old former Minnesota Lynx star explained she was miserable in her eight years in the league, partly because, she alleges, she was bullied because she was heterosexual–unlike most of the league, says Wiggins.

“Me being heterosexual and straight, and being vocal in my identity as a straight woman was huge,” Wiggins said. “I would say 98 percent of the women in the WNBA are gay women. It was a conformist type of place. There was a whole different set of rules they [the other players] could apply.

“There was a lot of jealousy and competition, and we’re all fighting for crumbs,” Wiggins said. “The way I looked, the way I played — those things contributed to the tension.

“People were deliberately trying to hurt me all of the time. I had never been called the B-word so many times in my life than I was in my rookie season. I’d never been thrown to the ground so much. The message was: ‘We want you to know we don’t like you.’ “

Wiggins, the 2008 Wade Trophy winner while at Stanford University, spoke extensively to the Union-Tribune before being inducted into San Diego’s Breitbard Hall of Fame on Tuesday.

If her assertion that 98 of the women in the WNBA are homosexual, that would leave only two or three straight players in the league out of 144 (12 active players on 12 teams).

Many WNBA players quickly disputed Wiggins’ allegations of a bullying culture in the league and that this culture was linked to players’ sexual orientation and gender expression.

The WNBA itself has not yet made an official statement.

DeLisha Milton-Jones, who won two WNBA titles and played in more games than any player in league history, said she was shocked by Wiggins’ claims.

“I know Candice as a sweet, intelligent young lady,” said Milton-Jones, who now is an assistant coach at Pepperdine. “I don’t want to take anything from her experiences while in the league, so I can only speak for what I experienced firsthand. And it’s in complete contradiction of what’s been stated by Candice.

“The WNBA has allowed many of us to live a dream. I pray that Candice does find peace with her life and is able to move forward without devaluing or diminishing what’s been priceless to so many others in the league.”

Monique Currie, an 11-year WNBA veteran wrote in a blog post that she was calling for Wiggins to be held accountable for her public and generalized accusations.

“I’ve never witnessed the kind of bullying Wiggins describes in her interview,” Currie wrote. “This does not mean it did not happen, but I’m proud to be a part of a league that supports inclusion and celebrates all players, regardless of their race, religion, or sexuality. We are a family made up of players that love and respect the game of basketball.”

Wiggin’s comments are even more surprising given the fact that she supported a WNBA Pride Night in 2015 that was hosted by the Chicago Sky.“Taking this stance, it is really nice,” Wiggins had said. “I think we’re setting a great example.”

“It’s important that we establish what it means to have the right to speak out, but also what it means to be accountable for what you say,” said Atlanta guard Layshia Clarendon, who’s played four seasons in the WNBA. “Because what Candice is saying includes stereotypes and damaging words to an entire group.”

Wiggins also told the Union-Tribune about her great experiences playing in Europe, where salaries for women’s basketball players are much higher.

“Nobody cares about the WNBA,” she said. “Viewership is minimal. Ticket sales are very low. They give away tickets and people don’t come to the game.”

Wiggins is working on her autobiography, which is based on journals she kept during her WNBA career.

INDIANAPOLIS, IN – OCTOBER 19: Candice Wiggins #11 of the Minnesota Lynx reaches for a loose ball against the Indiana Fever during Game Three of the 2012 WNBA Finals on October 19, 2012 at Bankers Life Fieldhouse in Indianapolis, Indiana.