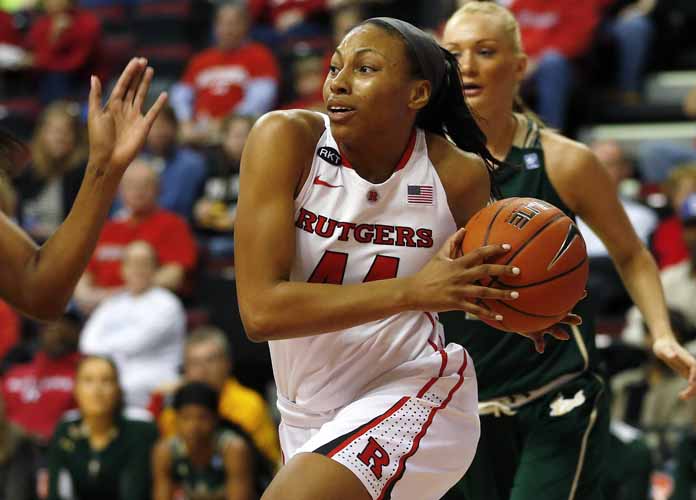 The debate over equal pay for men and women in the workplace is not new, but that doesn’t make it any less of an issue.

If workplace inequality is a problem, than the disparity between men and women in sports is a calamity.

Second-year WNBA player Betnijah Laney, has noticed the difference in treatment between male and female athletes in her short time at the professional level and, in many cases, it’s much worse than the disparity in a corporate setting.

“It’s definitely not the same,” Laney said in an exclusive interview with uSports. “We’re not treated anywhere near as equal (to) the men. That’s just going from comments by people saying, ‘Get back in the kitchen,’ and, you know, things like that.”

Laney, a four-year standout at Rutgers University and the No. 17 overall selection of the 2015 WNBA Draft, has no trouble navigating the busy streets of Chicago.

Despite her standing as an up-and-coming talent on the city’s WNBA franchise, the Chicago Sky, Laney is rarely “spotted” by fans like a reservist for the Chicago Bulls might be and she couldn’t recall any instances where she was stopped on the street for an autograph.

As with most of the socioeconomic issues at play in American society, the debate over equal pay is often played out on social media.

And the “comments” or depictions of women as “less than”, are not limited to social media.

A new Dove campaign, set to air during the Olympics calls out shamers of female athletes in an attempt to shed light on their mistreatment.

But not because she’s averaging 21.2 points and 7.2 rebounds per game for the Sky in 2016 and not because she is gearing up to represent Team USA Basketball in Rio either.

The Wilmington, Delaware, native made headlines this week because she publicly declared her sexual orientation in an upcoming article to appear in Vogue, identifying as gay and announcing her engagement to partner Amanda Clifton.

“It was just one of those articles where they came into my home, spent a couple days with me, and (fiancee) Amanda (Clifton) is a huge part of my life,” the reigning WNBA MVP told reporters in Rio. “So to leave her out wouldn’t have made any sense. It’s not a coming out article or anything. I’ve been with her for a very long time now, and people who are close to me know that, and that’s that.”

Had it not been for that “news,” which Delle Donne admitted was no secret, many sports fans, male or female, may still not know who she is or what sport she plays.

Fewer than 40 miles from Delle Donne’s Delaware hometown, Laney was honing her basketball skills in a town called Smyrna.

When considering the dearth of attention paid Delle Donne, just imagine how many less flashbulbs are popping when Laney makes a public appearance.

As her team was set to board a bus for a road trip, she recalled an onlooker asking a peculiar question.

“Oh, are you a high school team?” Laney remembered the individual asking. “I’m like … No,” she said.

These women, suited in warm-ups with the WNBA logo and “Chicago” or “Sky” plastered all about them, had reached the pinnacle of their sport in the U.S., and yet their own city doesn’t even realize they are professional athletes.

In the current athletic climate, it is symptomatic of where female basketball players really are in relation to their male counterparts.

Recognition is the least of their concerns.

Delle Donne was the second overall pick in the 2012 WNBA Draft. The second selection in the 2016 NBA Draft, Brandon Ingram , will earn $4.4 million in his first season.

The lopsided pay scale is forcing many of the WNBA’s best and brightest to seek compensation overseas.

After her rookie year in Chicago, Laney played in Australia last season for the Perth Lynx, averaging 15.2 points, 7.8 rebounds and 3.7 assists per game.

Many of the women take advantage of the opportunity to make some money, while sharpening their skill set.

The flip side? A year-round grind that puts players bodies in peril.

“Over time, it can wear you down,” Sky coach Pokey Chatman told the Chicago Tribune in 2014.

Laney’s 2016 season in Chicago was cut short when she tore her ACL and meniscus June 3, not likely related to her time playing in Perth.

But what choice do the Betnijah Laneys of the WNBA have?

“If you’re on the cusp, playing overseas keeps you relevant,” Chatman said via the Tribune.

Relevance is exactly what the WNBA is searching for right now.

“People just don’t know,” Laney said of her league. “I think we need to do more to put ourselves out there and find ways to get people engaged and actually want to actually enjoy women’s sports.”

A trip to the Sky’s official website reveals a pop-up featuring Laney, Chatman and a couple other Chicago players, inviting fans to a meet-and-greet style “Open House” Aug. 17.

The effort is definitely being made.

But will Rajon Rondo, Taj Gibson and Jerian Grant be hosting a similar gathering this fall?

Don’t count on it.

According to Laney, when people come to watch, they like what they see.

“Sometimes I get people who have never come to a game and they finally come and they’re like ‘Oh, I love this. This has been great,’” she said. “I think that’s part of it too. Just getting people to actually come and see what it’s about before they make judgment.”

Sadly, the ruling has already been rendered. The sports world does not view female athletes through an equal lens.