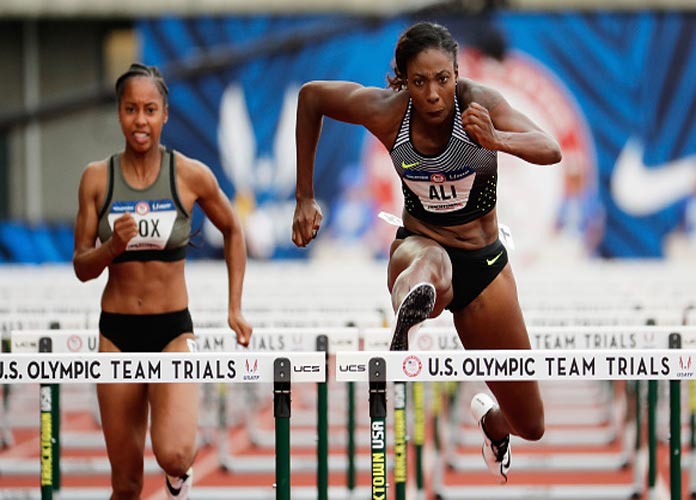 EUGENE, OR - JULY 07: Nia Ali competes in the first round of the Women's 100 Meter Hurdles during the 2016 U.S. Olympic Track & Field Team Trials at Hayward Field on July 7, 2016 in Eugene, Oregon. (Photo by Andy Lyons/Getty Images)

Nia Ali of the United States took her first step toward an Olympic medal on Tuesday morning.

Ali, a graduate of the University of Souther California, will now advance to one of Wednesday’s three semifinals, which begin at 7:45 pm. She is scheduled to race in the second semifinal, slated to begin at 7:53 pm.

“I really couldn’t wait for it,” Ali told an NBC announcer after her race. “I was just trying to get out here and feel the vibe and the energy of the whole stadium.”

The track and field star’s 15-month-old son, Titus Tinsley, and her mother, Melita Johnson, both attended her race on Tuesday.

Ali didn’t seem to struggle much to win the race, taking the lead at the midway point.

“I’m happy to get the first round out of the way,” she said.

Ali grew up in the Germantown area of Philadelphia. She moved to Pleasantville for her senior year of high school, and graduated from the local high school in 2006. Ali’s family is close with Pleasantville track and field coach Alan Laws, whom she refers to as her uncle.

Ali also won the 100 hurdles championship at the 2006 New Jersey outdoor track and field Meet of Champions. She still holds the Cape-Atlantic League 100 hurdles record with a time of 13.65 seconds.

Ali attributes her success, which includes an NCAA Championship for USC, to her time in Pleasantville.

“I was with some of the hardest working people I’ve ever been around,” Ali said in an interview last month. “They eat, breathe and sleep track and field. It instilled a lot of confidence in me to go to the next level. They’ve always believed in me. Everyone in Jersey has had my back, and I appreciate that.”

She comes from a family of runners, as Titus’ father Michael Tinsley ran for the U.S. in the 400 hurdles Monday.

The world record-holder in the women’s 100-meter hurdles, Kendra Harrison, wasn’t even able to make the U.S. Olympic team.

Jasmine Camacho-Quinn, running for Puerto Rico, ranked third after the prelims at 12.70, while sisters Cindy Ofili (12.75) and Tiffany Ofili Porter (12.87), both running for Great Britain, were fifth and 14th, respectively.

EUGENE, OR – JULY 07: Nia Ali competes in the first round of the Women’s 100 Meter Hurdles during the 2016 U.S. Olympic Track & Field Team Trials at Hayward Field on July 7, 2016 in Eugene, Oregon. (Photo by Andy Lyons/Getty Images)