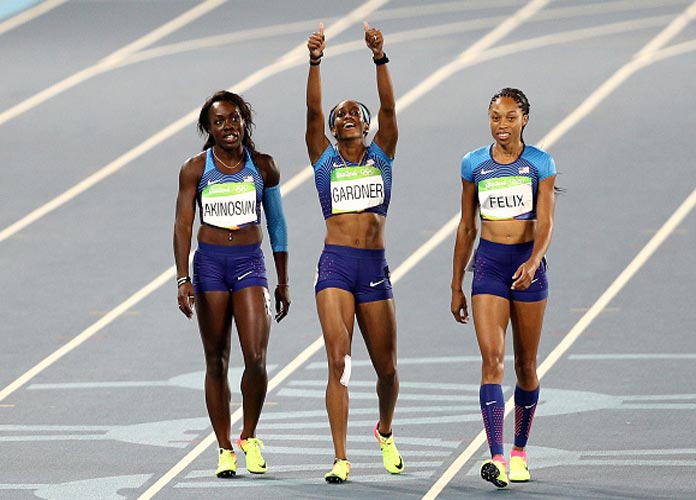 RIO DE JANEIRO, BRAZIL - AUGUST 18: Morolake Akinosun, English Gardner and Allyson Felix of the United States celebrate after the round one Women's 4 x 100m Relay Re-Run on Day 13 of the Rio 2016 Olympic Games at the Olympic Stadium on August 18, 2016 in Rio de Janeiro, Brazil. (Photo by Paul Gilham/Getty Images)

Several strange things have occurred in the women’s track and field competition at the Rio Olympics, but one of the most bizarre happened on Thursday night.

Running in Lane 2 on an otherwise empty eight-lane track, at a half-full Olympic Stadium, the United States’ women’s 4×100-meter relay team re-ran a qualifying round all by itself.

The re-run came hours after a botched handoff by the Americans was determined by track officials to have been caused by the obstruction of a Brazilian sprinter. The Brazilian, Fauiza Venancio, bumped into Allyson Felix as the latter prepared to pass the baton to English Gardner on the third leg.

The repeat went much more smoothly, as the Team USA runners crossed the finish line in 41.77 seconds, qualifying with the fastest time for Friday’s final.

China, which had finished eighth in the morning heat in 42.70 seconds, fell to ninth following the re-run and was eliminated from the final.

Felix said: “It was really weird, but we were walking out, people were cheering for us. I think it uplifted us a little bit, encouraged us. I think we’re just grateful.”

On Monday night, some competitors in a preliminary round of the men’s 110-meter hurdles were permitted a re-run after rain hampered the event. However, a replay like Thursday’s with one relay team on an empty track, is extremely rare at the elite level.

Asked if it had happened before, Bill Mallon, an Olympic historian, said in an email, “Not that I know of.”

At the U.S. Olympic track and field trials four years ago, Felix and Jeneba Tarmoh finished in a dead heat for third place in the 100 meters and were supposed to have a runoff in order to determine the final entrant at the London 2012 Games. However, Tarmoh declined to run again.

David Wallechinsky, another Olympic historian, said the closest comparison to Thursday’s relay replay was the final of the men’s open 400 meters at the 1908 London Olympics, one of the most controversial results in the history of the Summer Games.

According to sports-reference.com, an American named John Carpenter was disqualified in 1908 for impeding a British runner, forcing him wide in the homestretch.

The race was ordered rerun, but two other Americans in the final refused to participate. The gold medal went to the only participant, Wyndham Halswelle of Britain, the runner who had been obstructed by Carpenter.

Nonetheless, Wallechinsky said Thursday’s episode was still very different from this particular incident from over a century ago.

The United States is the defending Olympic champion in the 4×100 relay. Felix and the leadoff runner, Tianna Bartoletta, were members of the team that set a world record of 40.82 seconds at the 2012 London Olympics.

Felix reflected on the several strange moments she has faced in her Olympic career.

“Why me?” Felix said with a laugh. “I’m probably the least person who would ever want to be involved in anything like this.”

In the 400, she was favored but took silver as Shaunae Miller of the Bahamas dived across the finish line to win gold.

After Thursday’s incident, the American said she was not hurt, “just upset.”

She stumbled and then tossed the baton toward Gardner. The baton hit Gardner and fell to the track. Though they were surprised, the Americans powered through the end of the race.

In the women’s 5,000 meters, Nikki Hamblin of New Zealand and Abbey D’Agostino of the United States helped each other finish the race after colliding and falling to the ground with four laps remaining. Both were praised for embodying the Olympic spirit.

In the women’s marathon, German twins Anna and Lisa Hahner held hands across the finish line, leading to some criticism that they had not been seriously competing in the 26.2-mile race.

RIO DE JANEIRO, BRAZIL – AUGUST 18: Morolake Akinosun, English Gardner and Allyson Felix of the United States celebrate after the round one Women’s 4 x 100m Relay Re-Run on Day 13 of the Rio 2016 Olympic Games at the Olympic Stadium on August 18, 2016 in Rio de Janeiro, Brazil. (Photo by Paul Gilham/Getty Images)