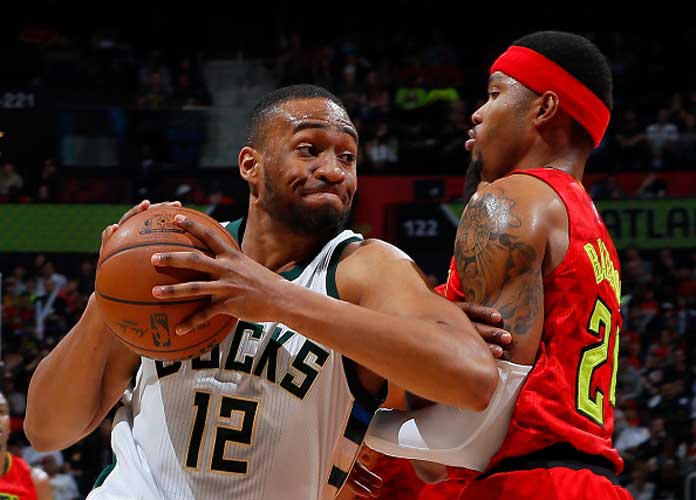 ATLANTA, GA - JANUARY 15: Kent Bazemore #24 of the Atlanta Hawks draws a charge from Jabari Parker #12 of the Milwaukee Bucks at Philips Arena on January 15, 2017 in Atlanta, Georgia.

The Atlanta Hawks and Portland Trail Blazers announced a trade on Monday night of Kent Bazemore to Portland in return for Evan Turner.

Bazemore, a journeyman shooting guard, has enjoyed a surprising amount of longevity in the NBA. Undrafted after four seasons at Old Dominion, next season will be Bazemore’s eighth NBA season. Bazemore signed with the Golden State Warriors after impressing the front office during the 2012 NBA Summer League, splitting time between playing in the NBA and the D-League during the two seasons that Bazemore played for the Warriors.

It was not until February 2014, when the Warriors traded Bazemore to the Los Angeles Lakers, that Bazemore established himself as a legitimate NBA player. In 23 games with the Lakers, Bazemore averaged 13 points per game on 45% shooting from the field.

After signing with the Hawks during free agency in 2014, Bazemore has played the last five seasons in Atlanta before being traded to the Trail Blazers Monday night. After accepting his $19.2 million player option for next season in April, Bazemore became a tradable piece for a Hawks team looking to sign Klay Thompson to a potential max contract this summer. Bazemore is an insurance piece for the Trail Blazers, assuming they do not re-sign Rodney Hood this summer.

Atlanta, I dont even know where to start. Want to thank the @atlhawks for the a tremendous run over the past five years. Lots of roots planted in this city! To the front office and management, thank you putting me in a situation to thrive. Good to know that people have your best interest in mind. Appreciate all the calls and messages everyone! #RIPCITY LETS GET IT!!! @trailblazers

“And when I’m gone they gone remember me. Not for how I hoop but for my energy..” Pdx, it’s been real. I enjoyed the journey, team accomplishments, and vibe of the PNW To my teammates: we did a lot of great things together. We overcame a lot because we were a true team and we persevered together. Thank you for allowing me to be part of your journey. The sky is the limit Blazers organization: Thank you for allowing me to come to work in a positive environment! I was able to make a lot of bonds beyond basketball with the coaching staff and all the people behind the scenes. First class place that will only keep reaping the benefits of good karma. Last but not least, THANKS FOR THE CHEESE 🤑 #namingmydogneil

Last season with the Trail Blazers, Turner averaged 6.8 points, 4.5 rebounds, and 3.9 assists per game playing a point-forward role off the bench. Turner also shot a career-low 21.2% from the three-point range. Turner, like Bazemore, is entering the final year of his current contract. Turner should provide the Hawks good leadership, the quality that he is probably best known for around the league and that made him one of the most popular players for the Trail Blazers.

Heard from a bunch of people about how great Evan Turner has been in locker rooms so that is encouraging news for the Hawks, particularly with a great locker room guy in Bazemore walking out the door.