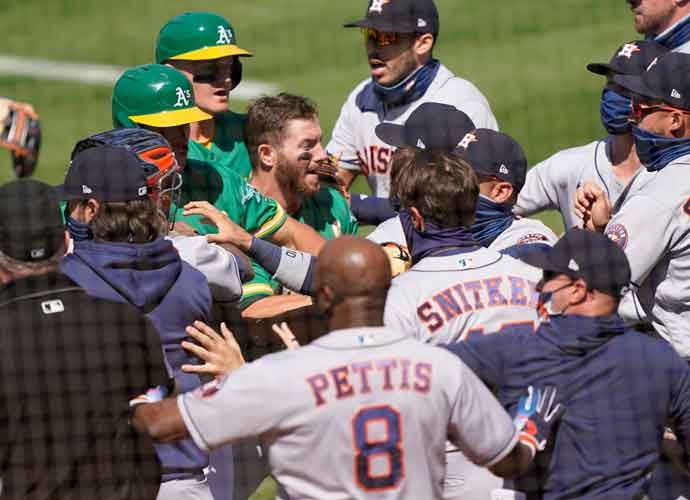 OAKLAND, CALIFORNIA - AUGUST 09: Players from the Houston Astros and Oakland Athletics get into a shoving match after Ramon Laureano #22 of the Athletics was hit by a pitch and charged into the Astros dugout in the bottom of the seventh inning at RingCentral Coliseum on August 09, 2020 in Oakland, California.

Following a brawl during Sunday’s game between the Oakland Athletics and Houston Astros, the MLB brought down the hammer on A’s batter Ramon Laureano who charged the Astros dugout by giving him a six-game suspension and Astros batting coach Alex Cintrón, who received a 20 game suspension for apparently egging Laureano on.

“I guess it was fun for him to do that,” Laureano said. “But I’m a man, I’m a freaking man. Whatever happens, happens. And I’ll take it. I couldn’t keep my cool, and I should have and I wasted my time with that guy.”

The Astros have been no strangers to hot tempers this season which is no surprise given that backlash was expected after a cheating scandal hit the team last offseason. Earlier in the baseball restart, Dodgers relief pitcher Joe Kelly got an eight-game suspension after he got into an argument with an Astros batter that cleared the benches, which led to criticism directed at the MLB considering no Astros player got that long of a suspension for a said cheating scandal. Laureano is appealing the suspension since the six-game suspension holds much more significance in the shortened season and is closer to a 16-game suspension for a normal-length season.