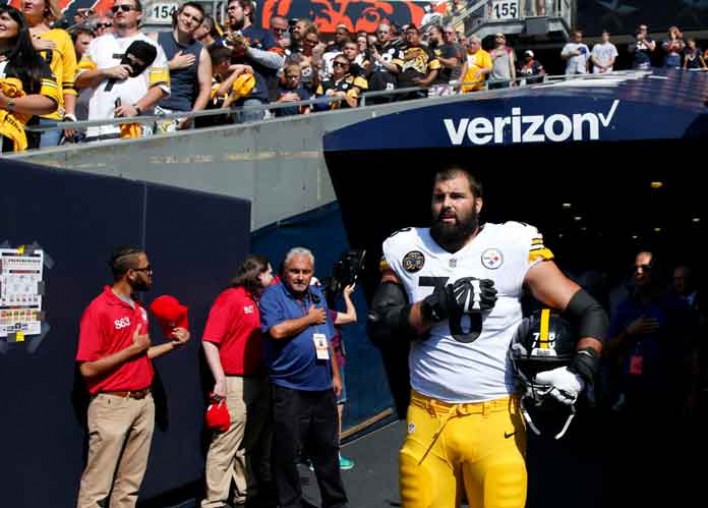 CHICAGO, IL - SEPTEMBER 24: Alejandro Villanueva #78 of the Pittsburgh Steelers stands by himself in the tunnel for the national anthem prior to the game against the Chicago Bears at Soldier Field on September 24, 2017 in Chicago, Illinois. (Photo by Joe Robbins/Getty Images)

Pittsburgh Steelers offensive lineman Alejandro Villanueva said in an interview this week that he hopes his teammates honor recently deceased assistant coach Darryl Drake by playing for him.

Drake died on Sunday at age 62. Although the exact cause of death remains unknown, the assistant coach — who joined the Steelers last season as a wide receivers coach — had been suffering from chest pains the night before.

Villanueva, an Army veteran who served three combat tours in Afghanistan, was approached on Wednesday by reporters who asked him about how losing Drake compared to the losses of fellow soldiers he experienced throughout his time as a veteran.

“You can’t compare the two,” Villanueva said Wednesday at Saint Vincent College in Latrobe, Pennsylvania. “In the Army, you prepare for these things to happen. You expect these things to happen. They definitely unify the group, maybe not for the right reasons, but they definitely have an impact on the morality of the unit. Sometimes, it’s vengeful. You want to go get the responsible culprits. In this case, it was one person who died.”

“The kids that died in battle are usually 18, 19 years old, so that’s a little bit tougher to swallow. You look at their kids that they’ll never be able to meet. It’s part of the culture. You deal with death. Once you get over the deployments, once you can put it in the rearview mirror, you can learn some very valuable lessons about death. It makes you appreciate life. Death is a part of life. You cannot have life without death. It’s something that individually everyone has to deal with at some point because it does come to all of us.”

Villanueva added that Drake, who was with the Steelers for 18 months, was “very close” with quarterback Ben Roethlisberger and with other players on the team.

“From the time he came he was very up front; he just walked in, he didn’t have to do any introductions,” Villanueva said of Drake. “He started to open up his mind. He became an outspoken leader about the things he thought had to be said. People respected that and responded to that. When you have someone who has such a genuine personality everyone becomes attracted to them. All of the offensive line had individual jokes with him. ”

In September 2017, Villanueva famously refused to protest the national anthem like many of his Steelers teammates, who chose to stay in the locker room for the playing of “The Star-Spangled Banner” before a game that season. However, the Army veteran later said he felt “embarrassed” for not siding with his teammates.