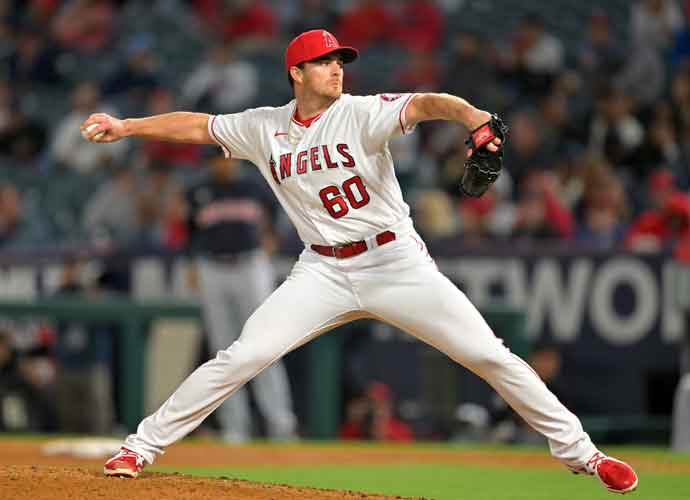 ANAHEIM, CA - APRIL 27: Andrew Wantz #60 of the Los Angeles Angels pitches during the game against the Cleveland Guardians at Angel Stadium of Anaheim on April 27, 2022 in Anaheim, California. (Photo by Jayne Kamin-Oncea/Getty Images)

In a game that ended up with benches clearing, eight ejections, and a crate of sunflower seeds being thrown, the Los Angeles Angels came out on top with a 2-1 win over the Seattle Mariners.

The benches have cleared between the Mariners and Angels 👀

It all started at the top of the second inning when Angels pitcher Andrew Wantz threw a wild fastball that struck batter Jesse Winker in his leg. Winker on his way to the plate jawed at Wantz and tried to storm the mound when both dugouts emptied and a full-on brawl ensued. This wasn’t a one-time incident, however. Wantz had already faced some issues earlier in the first inning when he threw just behind Julio Rodriguez‘s head. The previous night, Trout also faced a pitch that was too close to his head as well.

At the end of the brawl, six players and both managers were sent off including Winkler who had some choice gestures for the crowd in his departure. While this was being sorted out, however, Raisel Iglesias took a crate filled with sunflower seeds and threw it onto the field in anger. Those sent off include Mariners manager Scott Servais, Angels manager Phil Nevin, JP Crawford, Julio Rodriguez, Ryan Tepera, Iglesias, Winker and Wantz.

Winker’s antics earned him a seven-game suspension for his role in causing the fighting, but it also earned him a meal. One Seattle fan sent him a pizza directly to the Angels’ stadium and instructed the delivery driver, “For the visitors’ clubhouse, pizza is for Jesse Winker.” Winker thanked her for the pizza and the Mariners’ shouted her out on Instagram.

Many are blaming the escalation of conflict between the two teams on the officiating competency. Some say, home plate umpire John Bacon, who was a Triple-A call-up, should have issued both benches a warning due to the events that transpired the night before. Others are claiming he should’ve ejected Wantz immediately after he hit Rodriguez.

The Angles and Mariners will meet a multitude of times towards the latter part of the season. They play a two-game series in Seattle on August 5-6, a three-game series in Anaheim from August 15-17, and a four-game series on September 16-19 at Angel Stadium