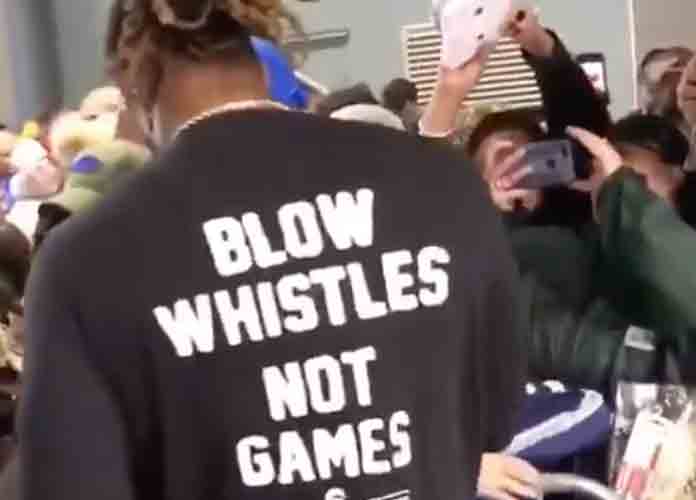 The 2019 Pro Bowl was actually attention-grabbing this year. Normally, the event isn’t circled on any calendars. I have a tough time imagining someone tuning in to see the game, nevermind taking the trek to Hawaii and paying for the tickets. However, that might change after this year.

Saints defensive end Cameron Jordan arrived for the game still fuming over the referees’ missed call in the NFC championship game. His shirt read, “Blow whistles not games” on one side and “Make calls not apologies” on the other.

.@camjordan94 arrived for the Pro Bowl with a t-shirt that says “Blow whistles not games” and “Make calls not apologies.” pic.twitter.com/4toGxiBnHI

That bold statement by Jordan is not to say the game itself was boring. Dee Ford, who cost his team a Super Bowl appearance this year because he lined up offsides, did it again at Camping World Stadium in Orlando. But this time, he backed up before the ball was snapped.

Don’t think anyone got upset this time at Ford. By the fourth quarter, Alvin Kamara, the New Orleans Saints running back, was playing defense. Kamara almost had a strip sack on Deshaun Watson before he realized at the last second it was the Pro Bowl and no one tries that hard. He then celebrated with Giants running back Saquon Barkley, who was also playing defense.

Barkley wasn’t the only NFC East running back that lined up on the other side of the ball. Cowboys coach Jason Garrett threw Ezekiel Elliot out onto the field during the third quarter. The fans and Garrett seemed to love it.

And if that wasn’t enough of the Pro Bowl, there was still the trophy presentation. That, as is typical Pro Bowl fashion, fell flat on its face. Jason Witten accidentally broke the trophy as he presented it. The thing just separated as if it was held together with Elmer’s Glue. Even the NFL doesn’t really care about the Pro Bowl. Also, take a look at Jets safety Jamal Adams when the trophy breaks.

Adams also won Pro Bowl MVP. It was the first time in the Super Bowl era a safety won the award. That’s not to say it matters, it’s still the equivalent of being the kid who plays all out in PE class, but congrats to him.

After the game, the 2017 quarterback draft class came together and reminisced. Scouts called it a historically weak year but just two seasons later, three quarterbacks from the class made it to the Pro Bowl. Patrick Mahomes and Mitch Trubisky joined Watson after the game for a picture.

Also, the AFC beat the NFC 26-7. Here’s to hoping for another potentially exciting Pro Bowl in 2020.