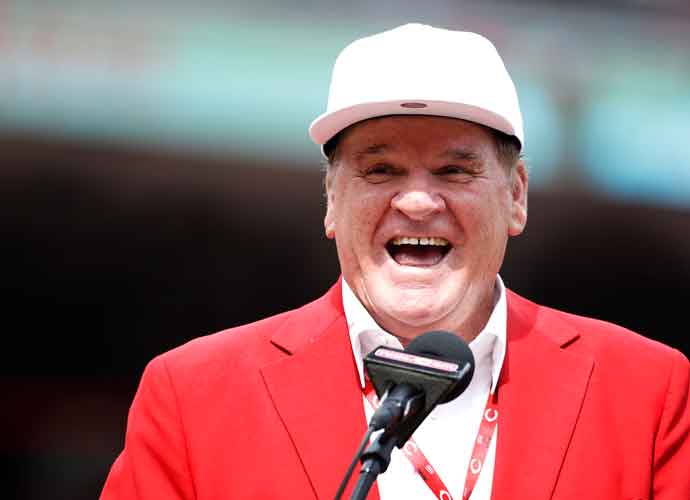 Former Cincinnati Reds great Pete Rose reacts during a statue dedication ceremony prior to a game against the Los Angeles Dodgers at Great American Ball Park on June 17, 2017 in Cincinnati, Ohio. The Dodgers defeated the Reds 10-2.

Former MLB star Pete Rose repeatedly dismissed reporters’ questions regarding a case of statutory rape at a press event at Citizens Bank Park in Philadelphia on Sunday. Before a ceremony celebrating the 1980 Phillies’ World Series victory, his first appearance on the field since the case became public, Rose repeatedly declined to address the issue and made demeaning remarks to Alex Coffey, a female reporter for the Philadelphia Inquirer.

Following a defamation lawsuit filed in 2016 by Rose against attorney John M. Dowd, court documents released in 2017 included testimony and a signed statement establishing that Rose engaged in a sexual relationship with a minor in the 1970s. At the time, the Phillies were planning to honor Rose by putting him on their Wall of Fame but scrapped those plans following the development.

Many of Rose’s comments on Sunday about the case have since been criticized, but the honoree’s response to Coffey has received the most attention. The reporter asked Rose if his presence at the ceremony sent “a negative message to women” due to the allegations.

I asked Pete Rose what he would say to people who say his presence here sends a negative message to women. His response: “No, I’m not here to talk about that. Sorry about that. It was 55 years ago babe.”

After the ceremony, Rose met again with Coffey, asking if he had offended her and joking that he would “sign 1,000 baseballs” for her forgiveness. He eventually apologized, but Rose’s comments toward Coffey were merely part of a larger effort by the former Cincinnati Reds and Phillies star to dismiss allegations of rape.

“Who cares what happened 50 years ago?” Rose said to an Associated Press reporter. “You weren’t even born. So you shouldn’t be talking about it, because you weren’t born. If you don’t know a damn thing about it, don’t talk about it.”

Rose is obviously familiar with controversy, as his illegal gambling habits as the Reds’ manager from 1985 to 1987 famously led to his lifetime ban from baseball and the Hall of Fame in 1991. Rose has spent his life since on the outskirts of MLB culture, making most of his money through book deals and autograph events, one of which notoriously occurs annually in Cooperstown, New York, on induction weekend.

When Rose walked on to the field at Citizens Bank Park on Sunday, the crowd gave him a standing ovation. In 24 seasons from 1963 to 1986, Rose earned 4,256 hits, the most by any player. He appeared in the All Star Game 17 times and won three World Series, two with the Reds as part of “the Big Red Machine” and one in Philadelphia.