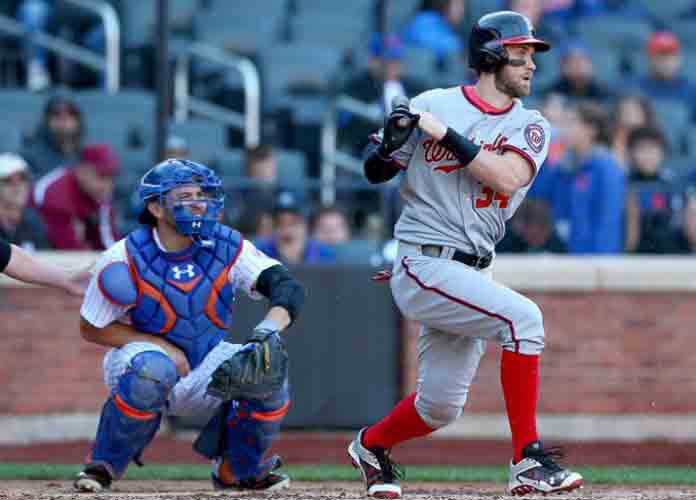 Bryce Harper #34 of the Washington Nationals hits in the seventh inning as Travis d'Arnaud #7 of the New York Mets defends on October 4, 2015 at Citi Field in the Flushing neighborhood of the Queens borough of New York City. (Photo by Elsa/Getty Images)

MLB’s offseason was filled with talk of a disaster waiting to happen, potentially the first strike since 1994. The cause was a rapidly drying up free agent market. Then, come March, Bryce Harper got 13-years, $330, Mike Trout opted to avoid free agency with a 12 year, $426.5 million contract, and Jacob deGrom fetched 5 years, $130 million.

To complain about a lack of contracts when all those four were signed in the same month seems ludicrous. But the only thing ludicrous is the contracts themselves. The players should’ve made more.

Let’s first look at Harper. At 26 years old, the Philadelphia Phillies signed one of the game’s premier talents for the rest of his career. Harper’s agent, Scott Boras, claims that he received short term deals north of $45 million per year. For what it’s worth, Philly locked him up early and even if his body turns to dust at 34, they’ll still have gotten close to a decade of meaningful production out of him. But what’s concerning is that Harper’s average annual value is $25.4 million, $0.2 million more than Alex Rodriguez’s in 2000. $25.2 million in December 2000 is equivalent in value to about $36.5 million now. That’s not to mention that MLB revenues have tripled in that time span. The Phillies even sold 100,000 additional tickets in the day after they signed him and Harper had the most popular jersey of all time. Harper’s value to the team is clear. Why he’s not paid in accordance with that is not.

Trout topped Harper’s deal, but the fact that the best player in baseball didn’t want to hit free agency doesn’t sit very well with fans who miss the nation’s pastime being a 12-month sport. While he’ll walk away with close to half of one billion dollars when he retires, the numbers don’t set records in the way that he does. It’s a tough argument to make but it’s easier when you realize any additional money given to Trout instead just sit in the pockets of the Angels front office. Trout’s career value was close to 2.5 times larger than Giancarlo Stanton’s through their age 24 season. At that age, both were blossoming superstars. Yet their contracts don’t reflect that at all. Instead, they both have average annual values in the same range. And the deal doesn’t take into account that the New Jersey native is wasting his time on some downright atrocious Angels squads that have only reached the playoffs once in his career.

The argument with deGrom is the easiest of all. If he pitched how he did last year, which is not impossible but not exactly an easy thing to do, he’d earn the value of his five-year contract by September of 2020. The New York Mets haven’t exactly been the smartest front office. This signing is a steal though.

While players get ridiculous contracts with numbers that only a few people on this earth will make in their lifetime, keep in mind that the owners will always make more. While at one point, they were more willing to pony up a greater share of revenue, today it just goes back into their pockets. Current deals are record-breaking but today’s revenues are even more so. Players generate most, if not all of that. Yet, more and more frequently they see less and less.