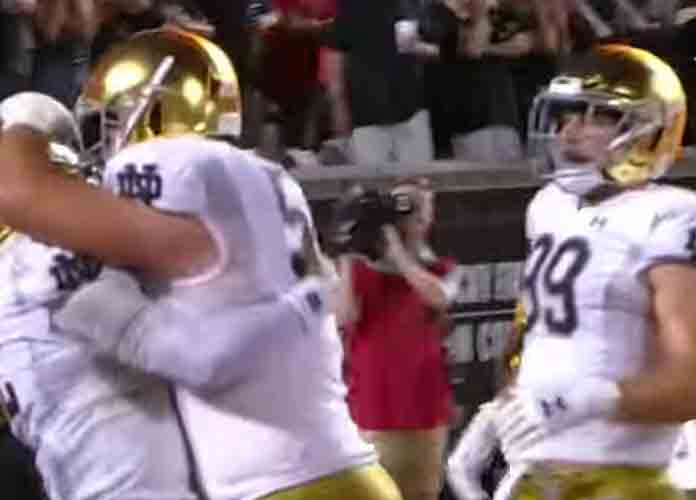 Notre Dame beat Louisville 35-17 on Monday, but that score does not tell the tale of a game.

Notre Dame started the Labor Day game with a winning drive, highlighted by a 37-yard scramble by quarterback Ian Book, who also made a fantastic drop pass on a cross-play to Jafar Armstrong. That first play led to a score. But it was not all roses for Book, who at times looked lost on the field. His passes were erratic at best and his decision making seemed hazy, as he did not appear to not know where his targets were supposed to be.

Louisville had a few chances in the first half to keep the score close, starting with a great throw from Jawon Passand that led to a one-handed grab from Marshon Ford as he was falling close to the left out of bounds. This would be the only catch for Ford.  Louisville QB Passand would go 12-of-27 with only 134 yards, with two running touchdowns on QB sneaks on the first and second drives. But it was Javian Hawkins who was the star for the Cardinals, splitting the defense and taking advantage of lapses in Notre Dame’s first-half defense, for a game-high 122 yards.

Jawon Pass’ second TD run has Louisville up on No. 9 Notre Dame 👀 pic.twitter.com/RBGOFeVnWQ

With the score tied at 14-14, Louisville had a chance to switch the momentum and hand quite the upset to Notre Dame, as they kept the No. 9 Fighting Irish from getting a first down around the 10-minute mark and moved the chains forward. But the Cardinals couldn’t capitalize.

There was also this moment where a Louisville cheerleader was hit in the face:

Notre Dame QB throws ball out of bounds and drills a Louisville cheerleader in the face. #NDvsUL pic.twitter.com/ZGoSUaql7u