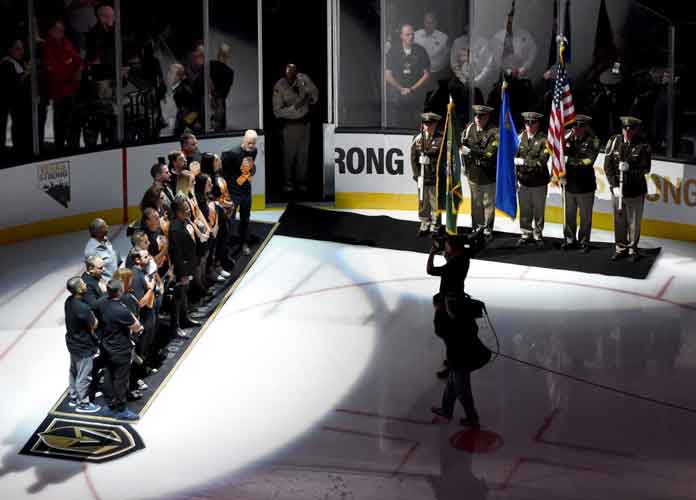 LAS VEGAS, NV - OCTOBER 10: Workers from the Route 91 Harvest country music festival (L) sing the American national anthem as the Las Vegas Metropolitan Police Department Honor Guard stands by before the Vegas Golden Knights' inaugural regular-season home opener against the Arizona Coyotes at T-Mobile Arena on October 10, 2017 in Las Vegas, Nevada. The Golden Knights honored first responders and victims of last week's mass shooting at the game. On October 1, Stephen Paddock killed 58 people and injured more than 450 after he opened fire on a large crowd at the Route 91 Harvest country music festival. The massacre is one of the deadliest mass shooting events in U.S. history. The Golden Knights won 5-2. (Photo by Ethan Miller/Getty Images)

Excellent news for the NHL and the teams still left in its postseason! The league received an exemption from Canadian health officials allowing cross-border travel for teams starting in the semifinal round of the Stanley Cup playoffs. When teams are in Canada, they will be required to stay in a bubble and be tested daily for COVID-19, similar to the tight restrictions that allowed the NHL to stage and complete its playoffs in two hub cities last year.

Canadian Immigration Minister Marco Mendicino’s spokesman Alexander Cohen said the decision was made in conjunction with the Public Health Agency of Canada and with approval from the Ontario, Quebec, Alberta and Manitoba governments. Cohen also said the government will not hesitate to take further action should it be required. “The National Hockey League is very appreciative of the decision,” NHL deputy commissioner Bill Daly said in a statement released by the league.

The exemption means the winner of the NHL’s Western Conference second-round playoff series between Colorado and Vegas will be allowed to travel to face the winner of the series between Winnipeg and Montreal. The potential alternative plan for the NHL was considering having its Canadian-based North Division champion relocate to a temporary home in the U.S. starting in the semifinals.

These restrictions didn’t impact just the NHL, but both the NBA and MLB as well. These rules came into effect in March 2020, shortly after the coronavirus pandemic began, and led to the NBA’s Toronto Raptors and Major League Baseball’s Toronto Blue Jays playing their regular seasons exclusively in the United States. The Raptors became a team playing out of Florida, while the Blue Jays are currently playing out of their Triple-A site in Buffalo, New York, after spending the first two months of the season playing at their spring training facility in Dunedin, Florida. This past week, Blue Jays president Mark Shapiro left the possibility of the team returning to Toronto at some point this season. Shapiro, however, cautioned the decision would likely hinge on Canada loosening its border regulations.