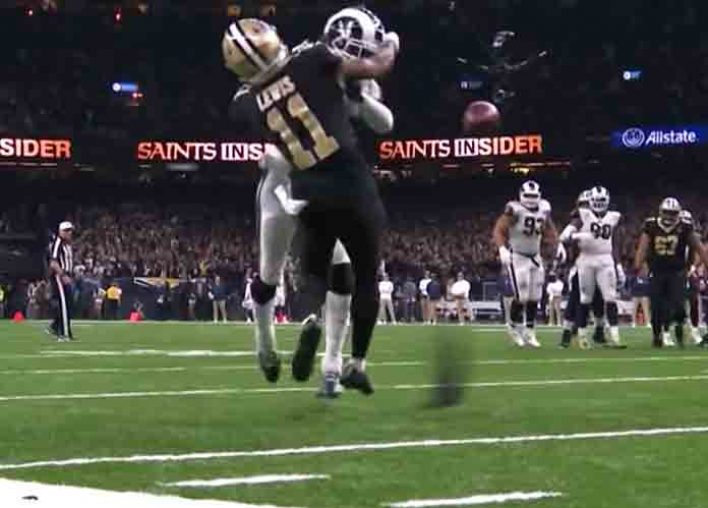 The Los Angeles Rams are headed to Super Bowl LIII after defeating the Saints 26-23 in overtime in New Orleans on Sunday, although that’s not how the NFC Championship Game should have ended.

Drew Brees, Alvin Kamara and the rest of the Saints — especially the team’s offense — were spectacular and much more dominant than the Rams, but what really (and very understandably) drew controversy in Sunday’s first NFL game was the terrible officiating.

HUGE play for the @Saints. #HomeInTheDome

However, the league at least acknowledged it this time. According to CBS Sports, New Orleans head coach Sean Payton spoke to the NFL’s office on the phone after the game and officials apologized for the fact that “they blew the call” on a potentially game-changing play in the final minutes of regulation, as Payton told reporters in a post-game news conference.

With just under two minutes remaining in the fourth quarter, the game was tied 20-20 and the Saints were a mere 13 yards away from the end zone when Brees targeted wide receiver Tommylee Lewis with a pass down the right sideline on a 3rd-and-10. Lewis might have caught the ball, but Rams cornerback Nickell Robey-Coleman viciously pushed him out of bounds.

How is this not a flag??pic.twitter.com/9eux632JpH

No flag on this play… pic.twitter.com/q5yDHqm0yQ

Unsurprisingly, Payton and many other members of New Orleans’ coaching staff were fuming over the referees’ lack of a flag on the play, especially because Robey-Coleman didn’t simply commit pass interference: he also should have received a penalty for a helmet-to-helmet hit.

As mentioned in the #LARvsNO broadcast, this should have been a penalty for Pass Interference. The defender was not playing the ball and contacted the receiver early. pic.twitter.com/treCuGiClr

“I don’t know if there was ever a more obvious pass interference call,” a visibly displeased Payton said in his post-game conference. “It’s tough to get over it. We’ll probably never get over it.”

“It was simple, they blew the call.”

Saints head coach Sean Payton discusses the explanation he got from the officials about the controversial pass interference no-call. pic.twitter.com/nCCFqFmF5N

The Rams intercepted Brees early in overtime, however, to help lead them closer to the victory, which they secured following a 57-yard field goal.

The @RamsNFL defense forces the INTERCEPTION!

With the loss, the Saints — who were the NFC’s No. 1 seed this season — saw their seven-game playoff home win streak ended. Meanwhile, the Rams will advance to their first Super Bowl since February 2002 to face the New England Patriots, who beat the Kansas City Chiefs 37-31 in overtime at Arrowhead Stadium in Sunday night’s AFC Championship Game. Kansas City was seeking its first Super Bowl appearance since January 1970, when they beat the Minnesota Vikings.

Funny enough, the Patriots beat the Rams 20-17 at Super Bowl XXXVI after the 2001 season. The Rams won their only Super Bowl in the modern era in January 2000, when they defeated the Tennessee Titans 23-16.

Saints fans everywhere are rightfully upset with the Rams and with NFL officials, and likely even worried that Brees, who turned 40 on Tuesday, may soon retire.

Super Bowl LIII will thus see each conference’s No. 2-seeded team compete for a chance at the trophy. Plus, the matchup on Feb. 3 in Atlanta will also feature the NFL’s youngest head coach — the Rams’ Sean McVay, who will be 33 on Thursday — and the league’s longest-tenured coach, 66-year-old Bill Belichick, who has been with the Patriots since 2000, the same year Tom Brady joined the franchise. One can only hope that Super Bowl LIII will see better call decisions from officials. The league’s postseason overtime rules are also questionable, but that’s a debate for another time.