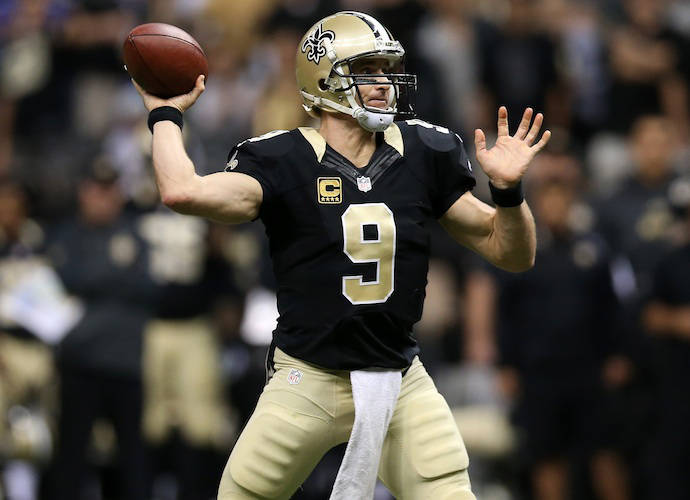 Drew Brees tossed four touchdown passes in New Orleans’ Thanksgiving matchup on Thursday night to propel the Saints to their tenth consecutive victory, a 31-17 home win over the Atlanta Falcons.

New Orleans’ only loss this season thus far has been its season opener, a 48-40 home defeat to the Tampa Bay Buccaneers (3-7). However, the Saints now sit more than comfortably atop the NFC South, with the second-place Carolina Panthers sitting at 6-4. Atlanta (4-7) is third in the division.

The Saints have also signed several veteran players in free agency or via trades in recent weeks, including wide receivers Dez Bryant — who along with Cameron Meredith and Ted Ginn Jr. is on injured reserve — Brandon Marshall, who has yet to play in a game for New Orleans, and cornerback Eli Apple, both of whom are former New York Giants.

According to ESPN, Brees tied a league record — set by Atlanta QB Matt Ryan in 2016 — by tossing TD passes to a whopping 13 distinct teammates thus far this campaign.

“You know, it says a lot about them. It says a lot about taking advantage of the opportunity and stepping up when we need it,” Brees said. “You know, we’re down some receivers from the beginning of the year until now. And these guys are having to step into some roles and do some things that maybe were unexpected. And yet it’s fun to watch them grow and gain confidence and build a chemistry.”

He continued: “For all of them to play the way they did, each get a touchdown on Thanksgiving day, all their family and friends watching at home, is pretty cool.”

New Orleans also currently has the NFL’s highest-scoring offense, with 37.2 points per game. The Saints next play the Cowboys (6-5) in Dallas on Thursday. Atlanta next hosts Baltimore (5-5) on Dec. 2.