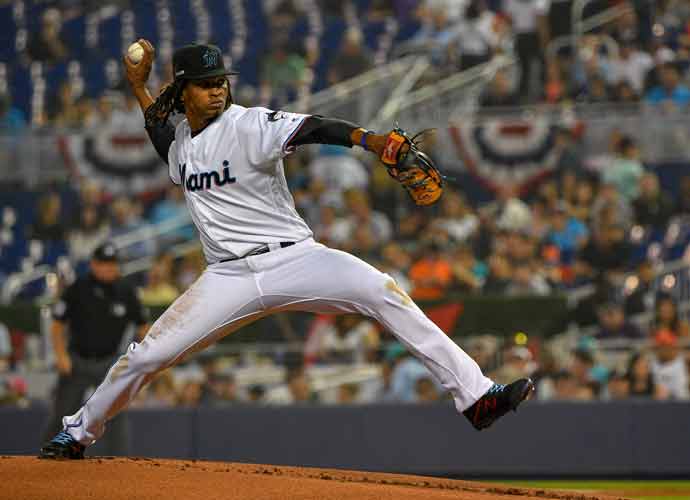 MIAMI, FL - MARCH 28: Jose Urena #62 of the Miami Marlins throws this first pitch in the first inning against the Colorado Rockies during Opening Day at Marlins Park on March 28, 2019 in Miami, Florida.

The morning before the Miami Marlins were set to play their home opener against the Baltimore Orioles it was reported that eight Marlins players and two coaches tested positive for COVID-19, which makes a total of 14 with four other players testing positive before the season opener against the Philadelphia Phillies. Of the players affected the four that consented to have their names released were catcher Jorge Alfaro, pitcher Jose Urena and outfielders Garrett Cooper and Harold Ramirez.

This comes less than a week after the MLB began its condensed 60-game regular season which has players and teams still traveling from stadium to stadium unlike the NBA’s bubble restart, which was reportedly an idea that was presented but was shot down by the player’s union. What the league does in response is going to be a litmus test for how they intend to handle the rest of the season. The game has already been canceled, but it is unclear what other measures the league will take in terms of quarantining the players and staff and whether or not they will cancel other games in stadiums that the Marlins played at–the league has postponed the Yankees-Phillies game already which is the stadium that the Marlins just played at.

It seems that this was inevitable that there would be an outbreak among teams, but it is very discouraging for the league for it to come this early. If they were able to get deep enough into the season they could make excuses that they are in to deep to stop but after only a few games, there is a growing possibility that baseball may have to be canceled again if a truly major outbreak rips through the sport. Even if there is not a major outbreak, we could see more players deciding to opt-out of playing in the season and after this disturbing revelation who could blame them?

It felt a little suspect that the MLB was just going to restart in a way that was not much different from their usual business model and the unspoken anxiety that the other shoe would drop has know come to fruition with the clear cracks in their plan beginning to show. The “pray that everything works out” plan does not seem to be working, and it will be interesting to see where the MLB goes from here.