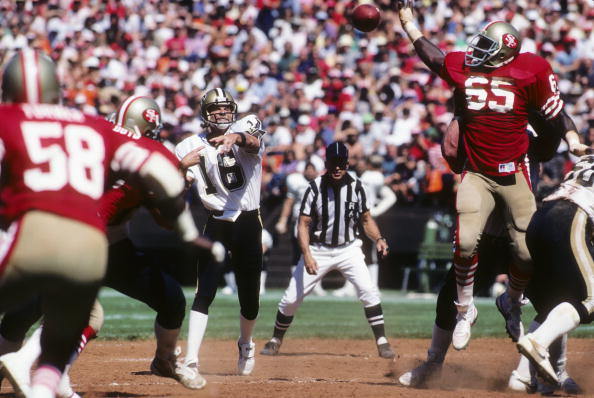 SAN FRANCISCO - SEPTEMBER 16: Defenive end Lawrence Pillers #65 of the San Francisco 49ers attempts to bat down a pass thrown by quarterback Ken Stabler #16 of the New Orleans Saints as NFL referee Tom Dooley #6 watches the action during a game at Candlestick Park on September 16, 1984 in San Francisco, California. The 49ers won 30-20. (Photo by George Rose/Getty Images)

Former Oakland Raiders quarterback Ken Stabler, who died in July 2015 from complications arising from colon cancer, was recently diagnosed as having suffered from the effects of the degenerative brain disease Chronic Traumatic Encephalopathy (CTE), the doctor who examined his brain told ESPN’s Outside the Lines.

Following his death on July 10 at the age of 69, Stabler’s brain and spinal cord were donated to Boston University’s CTE Center to support research into the disease among athletes. This disease, a form of brain trauma, is believed to be caused by repeated blows to the head, and can only be diagnosed after death via an examination of brain tissue.

Boston University’s Dr. Ann McKee, who examined Stabler’s brain, concluded that the former QB had suffered from Stage 3 CTE, and that the disease had become widespread throughout his brain.

“He had very substantial lesions. They were widespread. They were very classic. There was no question about the diagnosis,” McKee told Outside the Lines in an interview broadcast Wednesday. “And in some parts of the brain, they were very well established, meaning that he’d had it probably for quite some time.”

Stabler, who played for the University of Alabama Crimson Tide, threw for 27,938 yards during his 15-year NFL career, and compiled a 96-49-1 record as a starting QB and a win over the Minnesota Vikings in Super Bowl XI in 1977. He played for the Raiders from 1970 to 1979, and won the NFL MVP award in 1974. He also played for the Houston Oilers and the New Orleans Saints before retiring after the 1984 season.

Stabler’s longtime partner Kim Bush, who met him in 1999, described some of the mental and physical damage he suffered in his last few years, including severe headaches, disorientation, forgetfulness and insomnia.

“We talked at length about head injury,” Bush told OTL. “And he … he was certain that what he was suffering was the consequences of playing football. I asked him point-blank, ‘What are your feelings about that in terms of donating your brain for research and the science?’ And that’s the night he told me that, ‘Yeah, I definitely should do that, that’s the right thing for me to do.’ ”

Scores of football players have recently died and been diagnosed with CTE, including Frank Gifford and Junior Seau, although Stabler is the first prominent quarterback. Stabler was also found to have taken more hits than the average quarterback. McKee also told OTL that the length of Stabler’s career also definitely played a factor in his development of the disease.

“He played for 28 years. He began at the age of 9. He played a very long time in the NFL. So it’s not really a surprise that he might have developed this disease.”

Jay Cutler Reveals That He Is Feeling Effects Of CTE