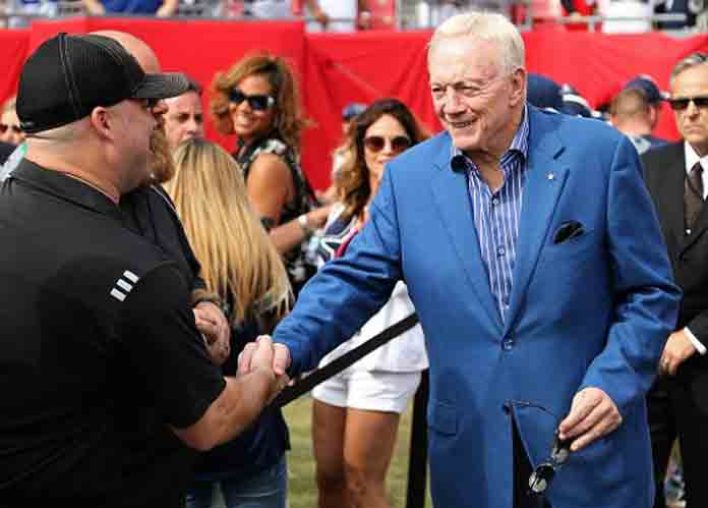 The NFL continues to evolve into a passing league. Running backs have slowly lost their franchise value, as history shows a back’s career in the NFL is short-termed.

The beating that these NFL running backs get is second-to-none, and NFL franchises have recognized that. Like the Los Angeles Chargers not wanting to re-sign Melvin Gordon to a new exclusive contract, Jerry Jones and the Dallas Cowboys want to follow suit with the league’s leading rusher, Ezekiel Elliott.

Jones came out to say that “the point there is you don’t have to have a rushing champion to win a Super Bowl, but Emmitt [Smith] was the first one to do it,” he said, according to CBS 11.

Of course, Jones has been in charge of “America’s team” for 30 years now, and had Emmitt Smith carry his team to a Super Bowl in 1992. Smith went on to win two more Super Bowl titles with the team, but not before holding out on his contract and missing the first two games of the 1993 season.

Elliott looked to his predecessor and tried to prove that running backs are vital tools to a successful modern-day offense. After all, Elliott has been the leading rusher in the league two out of the last three years he’s been in it.

You don't need to have a rushing champion to win a Super Bowl. Jerry Jones is right. The Patriots have proven that recently.

The Cowboys, as constructed however, need Zeke. Not only huge as a rusher, dude had 77 catches and 3 receiving TDs last year, too.

The Cowboys find themselves in a predicament as well regarding who to give their new deals to.

Dak Prescott’s rookie deal is up at the end of the upcoming season, and headlines have rumored him to get a high extension, as the Cowboys believe he is their guy. Elliott still has two years left on his rookie deal, but wants an extension now. The team has also been rumored to extend star receiver Amari Cooper and leading linebacker Jaylon Smith.

“Consequently, when we’re looking at putting Zeke’s contract in place, we’ve got to realize that the ultimate goal is to win the Super Bowl,” Jones said, according to USA Today. “So you got to do all of the things along with having Zeke that allow you to have other players so that you can win the Super Bowl. That’s what we’re going through.”