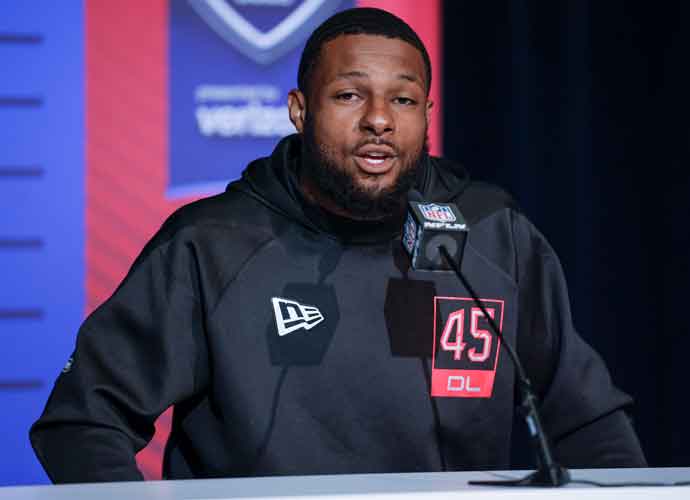 INDIANAPOLIS, IN - MAR 04: Kayvon Thibodeaux #DL45 of the Oregon Ducks speaks to reporters during the NFL Draft Combine at the Indiana Convention Center on March 4, 2022 in Indianapolis, Indiana. (Photo by Michael Hickey/Getty Images)

Kayvon Thibodeaux has taken a lot of heat for his celebration after sacking and injuring Indianapolis Colts quarterback Nick Foles – but some might be getting the wrong idea.

In fact, Colts coach Jeff Saturday had some strong remarks today, referring to the 2022 fifth overall pick’s actions as “tasteless” and trash.”

He also criticized his offensive line for not sticking up for Foles.

The incident occurred with about 50 seconds left in the second quarter when Thibodeaux came flying off the edge and drilled an unexpected Foles from his back into the turf.

While Foles appeared to be convulsing on the ground, Thibodeaux was seen doing snow angels.

That doesn’t sound like a great look for Thibodeaux and makes it look like he was celebrating Foles’ injury.

However, as with everything – intent and context are always important.

If you slow it down, you’ll see that Thibodeaux was rolled over to his backside after completing the sack with his head facing the opposite way of Foles while doing snow angels.

Thibodeaux said he didn’t see Nick Foles next to him when he was celebrating. pic.twitter.com/GUuicAiR4A

While Thibodeaux did turn his head over towards the Colts quarterback towards the end of the clip, he likely did not see what happened beforehand and didn’t know he was injured and the nature of it.

“I mean, after a sack, you celebrate. I think that, when I did realize he was hurt, we started getting up,” Thibodeaux said. “When you’re doing the celebration, you’re not looking to see who’s doing what. I hope he gets well and I hope he’s alright, obviously.”

Unfortunately for Foles, he will miss the Saturday finale against the Houston Texans with what is being described as a rib injury.

Saturday is understandably frustrated and is sticking up for his quarterback.

But for Thibodeaux, the reaction is likely being overblown and taken out of context.

His intent was to celebrate a big play and nothing more.

In his rookie season, Thibodeaux has recorded four sacks.