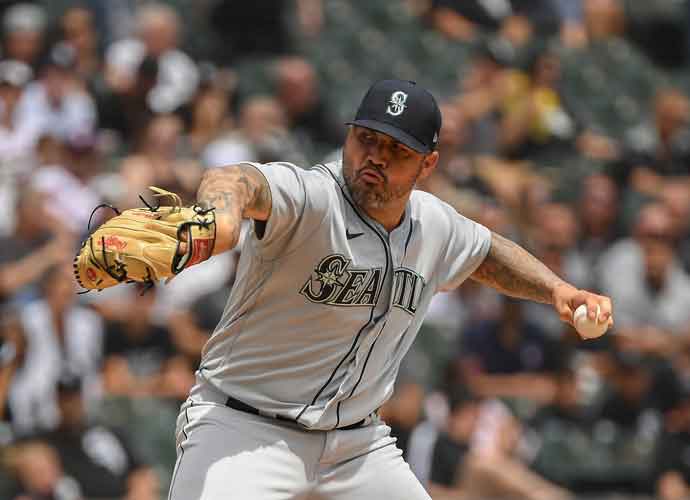 CHICAGO, ILLINOIS - JUNE 27: Hector Santiago #57 of the Seattle Mariners pitches in the third inning against the Chicago White Sox at Guaranteed Rate Field on June 27, 2021 in Chicago, Illinois. Today's game is a continuation from yesterday, which was suspended due to inclement weather. (Photo by Quinn Harris/Getty Images)

Héctor Santiago became the first player to be ejected under the league’s plan to heavily check pitchers for the use of foreign substances. Umpires enforced the rule for the first time when they inspected the Seattle Mariners pitcher’s glove for sticky substances.

“He was ejected for when his glove was inspected, for having a foreign substance that was sticky on the inside palm of his glove,” crew chief Tom Hallion explained after the game. Hallion also said that the substance was “very noticeable,” and all members of the umpiring crew agreed with the determination that it was a foreign substance.

#Mariners Hector Santiago is ejected after check of his glove.#SeaUsRise pic.twitter.com/PRwBjMXlro

Any sort of foreign substance anywhere on the pitcher, his glove, his hat, and belt buckle carries an automatic ejection. The league office will now examine the glove where the umpires found the substance deemed as a rules violation. This will determine whether the ejection was warranted or not. If the league concludes that Santiago was violating the rule, he’ll be suspended for 10 days with pay.

Both the Mariners and Santiago dispute the claim that he had a foreign substance in his glove. “Once they take it back and check it, it’s just sweat and rosin,” Santiago told reporters. “If they’re going to do all this science stuff, it’s going to be sweat and rosin. We’ll be all right.”

As part of the deal, the Mariners wouldn’t be allowed to replace him on the active roster, which means they would be down one pitcher spot for 10 days.