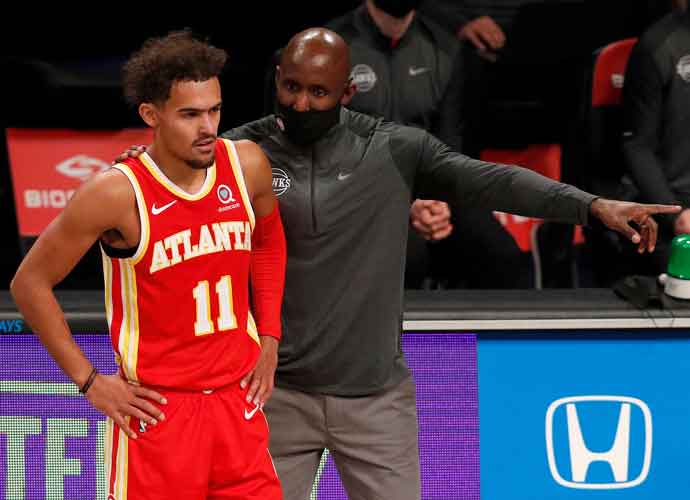 NEW YORK, NEW YORK - DECEMBER 30: (NEW YORK DAILIES OUT) Head coach Lloyd Pierce and Trae Young #11 of the Atlanta Hawks in action against the Brooklyn Nets at Barclays Center on December 30, 2020 in New York City. The Nets defeated the Hawks 145-141. NOTE TO USER: User expressly acknowledges and agrees that, by downloading and/or using this photograph, user is consenting to the terms and conditions of the Getty Images License Agreement. (Photo by Jim McIsaac/Getty Images)

On Monday, the Atlanta Hawks announced that they fired head coach Lloyd Pierce after beginning the NBA season 14-20.

The Hawks have now officially announced that they’ve dismissed Lloyd Pierce as coach.

GM Travis Schlenk: “We would like to thank Lloyd for his work and commitment to not only the Hawks organization but the city of Atlanta.” pic.twitter.com/rNHUjNcerb

Pierce was in the middle of his third season coaching the team. He was hired before the 2018-2019 season after previously acting as an assistant to the 76ers and the Grizzlies.

“We would like to thank Lloyd for his work and commitment to not only the Hawks organization, but the city of Atlanta,” Hawks general manager Travis Schlenk said in a statement.

“He and his wife, Melissa, are tremendous people who have made a positive impact throughout the city. We have high expectations for our team on the court, and we believe by making this change now that we can have a strong second half of the season.”

Throughout Pierce’s first two seasons, the Hawks only won 49 games and entering this season, the team had higher expectations after a very active NBA offseason. Atlanta is currently No. 11 in the Eastern Conference.

Veteran coach Nate McMilllan, who joined the team as an assistant this past offseason, recently coached the team for two games after Pierce returned home for the birth of his second child. McMillan was previously the head coach of the Indiana Pacers.

ESPN Sources: Nate McMillan has accepted the interim head coaching job with the Hawks. McMillan has a 667-591 (.530) record in 16 seasons as head coach with Seattle, Portland and Indiana.