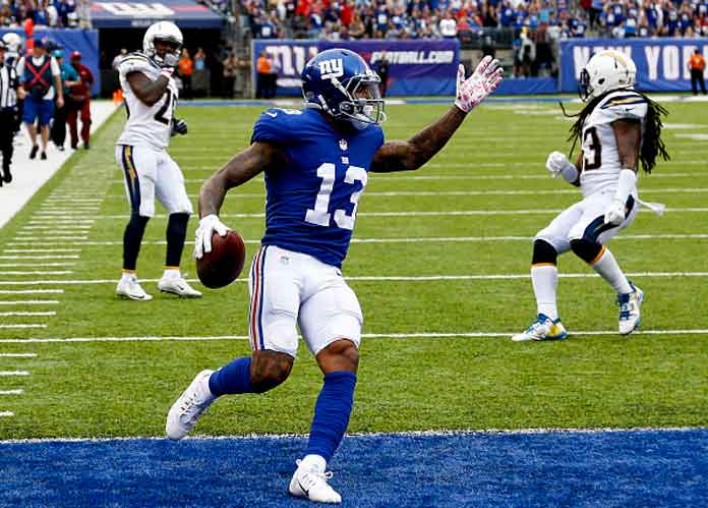 EAST RUTHERFORD, NJ - OCTOBER 08: Odell Beckham #13 of the New York Giants runs in for a touchdown during their game against Los Angeles Chargers at MetLife Stadium on October 8, 2017 in East Rutherford, New Jersey. (Photo by Jeff Zelevansky/Getty Images)

The New York Giants are reeling. They unleashed offensive hell on the Tampa Bay Buccaneers, though New York just escaped with a 38-35 victory after Jameis Winston helped to lead a comeback attempt. It’s the second game they’ve won in a row, the first win streak for the G-men in 700 days.

For Giants fans, its been 700 days of miserable, grueling football. That’s helped to erase the memories of a now distant 2016 season, one where the team finished 11-5 and strung four wins together to close out the season, the last time fans were able to enjoy a win streak in New York. This time, each win means more than the former, and a loss means certain doom for a team that has found its footing at an inopportune time.

Given that we’re more than halfway through the season and that the team still sits in last place of the NFC East at 3-7, realistic playoff hopes were all but obliterated quite a while ago. But the Giants, historically the crusaders of late-season runs when the circumstances are bleak, are wise to the notion of reaping an opportunity when it shows. Sometimes.

As is customary with the NFC East, though, order has been upended, and calamity has ensued. The defending Super Bowl champion Eagles are 4-6, while Washington is leading the division with no quarterback, and is only one game ahead of Dallas. It’s the Wild West, and that means Big Blue is still hanging around by a shoelace.

It also means the team will likely have to confirm Odell Beckham Jr.’s prophecy of running the table to reach 9-7 to catch up with whoever ends up in first place come January. Interestingly enough, three of the Giant’s six remaining games are against their NFC East peers, the first being against the Eagles next Sunday. Several of these games will be on the road, a particularly difficult feat for the struggling team, especially considering some of their other opponents. The team is set to host the Bears, Titans, and Cowboys, but will visit Washington and Indianapolis.

“That’s just the goal. Same thing I said before the season, the goal is to win a Super Bowl,” Beckham said on his prediction. “It’s always going to win a Super Bowl. If you’re just here to have fun or whatever else, I don’t think you should be here. The goal is to win every game. I’m trying to win. If we play 16, I’m trying to win 16. Win the four in the playoffs, and win the Super Bowl. You never want to lose. My mentality is going to be win these last seven games, no matter who believes it or what’s said, or anything like that. That’s going to be my goal.”

The continuity of spectacular offense from the likes of running back Saquon Barkley, and recently, quarterback Eli Manning, have spurred a resurgence of productivity, and the team recognizes the necessity to maintain that if it wishes to play in January.

“[Barkley] has gotten better every week. That’s what you ask everyone to do and I thought [Sunday] was the best he ran,”  Manning said. “He had a better tempo. He was hitting the holes fast and was running hard. He was close to breaking a couple of long ones but was just efficient.”

As is a holiday tradition in New York, its time to sit back and anxiously watch each erratic game the Giants play, and hope they find a way to mount themselves out of obscurity ahead of another long winter.