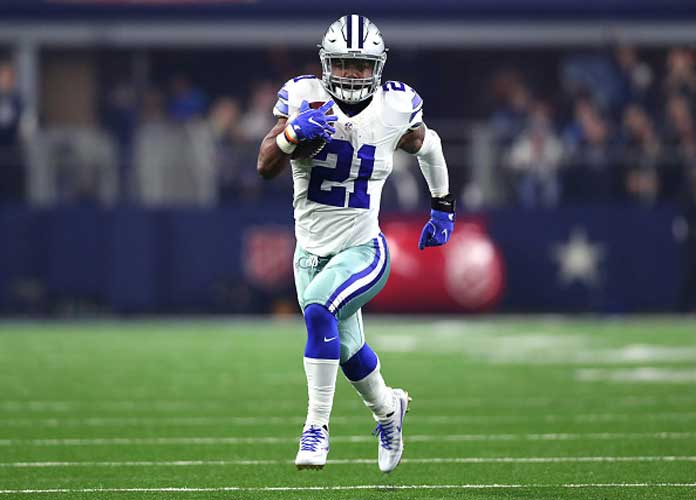 Ezekiel Elliott Puts Cowboys On His Back, Team Stomps Eagles 27-20 At Home [VIDEO]

The Dallas Cowboys (4-5)  are right back in this thing. After a powerful 27-20 win in Philadelphia, Dallas now holds the tiebreaker over the defending champion Eagles, also 4-5, and are just two games out of first place in the NFC East.

zeke, Cowboys Even Up With Eagles In Win On SNF

Running back Ezekiel Elliot had a riveting performance, strapping the ‘Boys to his back and soaring above football irrelevancy behind his 151 yards and two touchdowns. Surpassing the 150-yard mark for the fifth time in his three pro seasons, Elliot has become the only player in the league to have this distinction. He also tallied six catches for 36 receiving yards. The highlight of the night, a play that was representative of the Cowboys’ impressive Sunday night upset, Elliot thrust into the Philadelphia sky over cornerback Tre Sullivan for the first down and stumbled inside the ten-yard line for what would have been a score had he kept his balance.

The Cowboys failed, however, to convert that momentum into a score, settling for a field goal just before the half. Zeke’s trememndous feat set the tone for the rest of the game in spite of a fruitless first half, as Dallas unleashed the entire arsenal on Philly, even executing a fake punt on their own 31.

“I think if we don’t take some of those risks,” Cowboys owner Jerry Jones said, “we don’t come out of here with a win.”

On the defensive side, the Cowboys bend-don’t-break effort yielded them a prosperous turnout, snagging a pick from quarterback Carson Wentz on the other side. Rookie corner Leighton Vander Esch did the honors, gauging the situation and dropped to the right angle for the pick, reading Wentz’s eyes and undercutting the throw on first down. Vander Esch accumulated 13 solo tackles (the most by a Cowboys defender this season), and one tackle for loss, solidifying himself as an unheralded steal of the 2018 Draft (he was taken at 19).

Elliot had his eyes set on the end-zone, but kept the playoffs in the forefront of his mind.”It was absolutely mandatory that we went and got the win if we wanted to keep our hopes up for winning the division and making the playoffs.”

To secure a chance of claiming the division, the Cowboys will likely need to win their games at home against Washington and the Eagles within the next month. They made that desire felt with their play, and the man of the night knew an A-1 effort was the only option.