Eli Manning Is Benched For First Time In 13 Years, Geno Smith To Start For Giants Vs. Raiders, Twitter - uSports.org 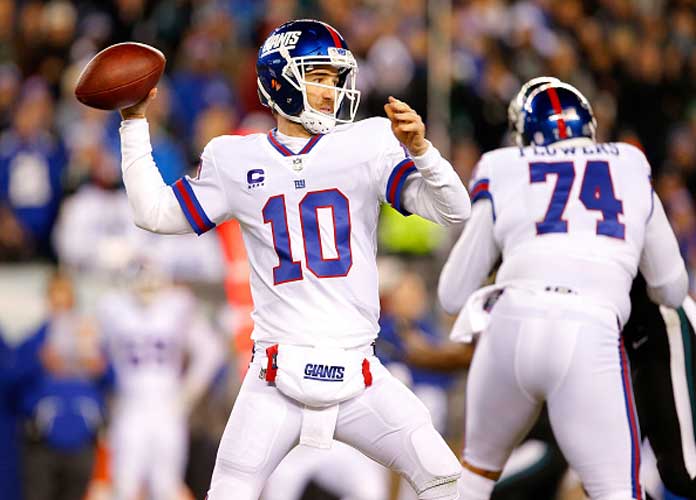 PHILADELPHIA, PA - DECEMBER 22: Quarterback Eli Manning #10 of the New York Giants looks to throw a pass against the Philadelphia Eagles during the second quarter of the game at Lincoln Financial Field on December 22, 2016 in Philadelphia, Pennsylvania. (Photo by Rich Schultz/Getty Images)

Eli Manning Is Benched For First Time In 13 Years, Geno Smith To Start For Giants Vs. Raiders, Twitter

New York Giants fans have been accustomed to seeing Eli Manning start every game since nearly the beginning of his NFL career, but he has now been replaced.

The team announced Tuesday that Geno Smith will replace Manning — who has played his entire 13-year career for the Giants — as starting quarterback for Sunday’s matchup against the Raiders in Oakland. Smith, 27, played his first four seasons with the Jets before signing with the Giants last offseason.

Rookie Davis Webb — a third-round pick out of California — will also receive a few snaps before the end of the season, the Giants added.

Manning — the top overall pick out of Ole Miss in 2004 — has started every Giants game since Nov. 21, 2004, a streak of 210 straight regular-season contests that ranks second on the quarterback career list behind only Brett Favre’s 297. He took over for veteran Kurt Warner just ten games into the season.

Manning has won two national championships (after the 2007 and 2011 seasons) with the Giants, and was named the MVP of both those Super Bowls. He is also a four-time Pro Bowler and was named the Walter Payton NFL Man of the Year in 2016.

The Giants (2-9) have endured an atrocious season — that has included a string of injuries and short suspensions — under second-year head coach Ben McAdoo. New York’s only two victories this year have come against the Denver Broncos in Week 6 and against the Kansas City Chiefs in Week 11. The team’s offense has been especially terrible: it ranks second-to-last in the league in scoring.

In Thursday’s Thanksgiving 20-10 loss to the Washington Redskins, Manning struggled. He finished 13 of 27 for 113 yards and an interception. This has not been the 36-year-old quarterback’s worst season statistically, although it remains clear the Giants are pursuing as many options as possible.

“Surprised is not the word,” Coughlin, the executive VP of football operations for the Jaguars, told WJXL-AM. “My sentiments are totally with Eli Manning. I love the kid. He is a class act. He is a two-time Super Bowl champion. He is the finest, most humblest young man in that locker room.”

Added Coughlin: “I haven’t followed the Giants. I know it’s a disappointing year, but my thoughts are strictly with Eli. I was very upset … when I heard that.”

Coughlin coached Manning from 2004 to 2015. Among the other ex-Giants who weighed in on the QB’s benching were CBS analyst David Diehl, Justin Tuck, Tiki Barber, Osi Umenyiora and Plaxico Burress. Diehl even noted a classy move that Manning made following the news.

“Just the way that this is going down is very disheartening from Giants fan’s perspective and as a former teammate of his, and all the great things he achieved in his career,” said Barber. “You don’t want to see it end like this. It’s disappointing. I feel like it’s premature.”

I’m absolutely speechless. I’ve watched every game & have sat through this rough @Giants season & this what you do to a man who has lead this team for 210 straight games

@BobPapa_NFL & I just took a break from our radio show to grab a coffee to see only 2 @Giants players in the cafeteria. It was Eli Manning sitting next to Davis Webb mentoring him #Respect #Character #Selfless

I’m honestly at a lost for words. As a person that has seen Eli the QB but also Eli the Man, I’m truly pissed about what has taking place today. This decision is one of the STUPIDEST I’ve seen in my time being asap with pro sports #noloyalty #14years #bullshit

All of these players’ sentiments are perfectly understandable, particularly as everything appears to show that most of the Giants’ blunders this season are nearly everyone’s fault except Manning’s.

Manning reportedly was offered to start against Oakland, but declined. In the Giant’s press conference on Tuesday, McAdoo stated he wanted to rotate the squad and assess the depth chart now that the team won’t be advancing to the playoffs. They suggested starting Smith the second half against the Raiders, but Manning said he didn’t feel comfortable starting merely to keep his 13-year streak alive. So he surrendered his starting position to Smith and potentially Webb.

“Coach McAdoo told me I could continue to start while Geno and Davis are given an opportunity to play,” Manning told CBS Sports. “My feeling is that if you are going to play the other guys, play them. Starting just to keep the streak going and knowing you won’t finish the game and have a chance to win it is pointless to me, and it tarnishes the streak. Like I always have, I will be ready to play if and when I am needed. I will help Geno and Davis prepare to play as well as they possibly can.”

WATCH: Eli Manning reacts to the announcement that he will not start on Sunday pic.twitter.com/nQoPEcfTl3

Coughlin and Diehl’s compliments for Manning seem accurate given this quote. The quarterback truly speaks and acts like a humble and selfless man.

Webb, selected in the third round from California, called Manning the “best teammate I’ve ever had in my life” as part of his effusive praise for the veteran.

“Today was pretty big,” Webb said Tuesday. “The way [Manning] handled himself, the way he handled himself in front of teammates, myself and Geno included, he was first class.”

PHILADELPHIA, PA – DECEMBER 22: Quarterback Eli Manning #10 of the New York Giants looks to throw a pass against the Philadelphia Eagles during the second quarter of the game at Lincoln Financial Field on December 22, 2016 in Philadelphia, Pennsylvania. (Photo by Rich Schultz/Getty Images)