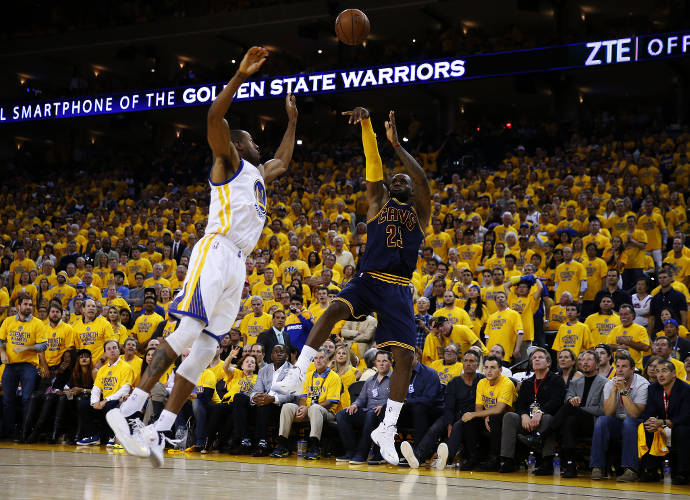 during Game One of the 2015 NBA Finals at ORACLE Arena on June 4, 2015 in Oakland, California. NOTE TO USER: User expressly acknowledges and agrees that, by downloading and or using this photograph, user is consenting to the terms and conditions of Getty Images License Agreement.

Last night’s Game 1 of the NBA Finals was a close one. Four quarters wasn’t enough to settle the action and even though the Golden State Warriors ended up running away with the game in the overtime period, the biggest story wasn’t Steph Curry’s clutch take over (he finished with 26 pts, 4 rebounds and 8 assists) but rather the re-exacerbation of Kyrie Irving’s knee injury. 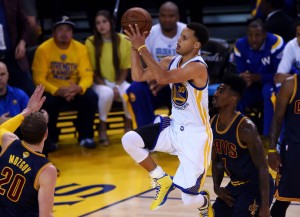 LeBron James is undisputedly the heart of the Cleveland Cavaliers and really major part of why they’re even in the Finals but the dog and pony show of LeBron and Timofey Mozgov is not going to be able to take down the Splash Bros and outstanding defense of Golden State. All season we were promised that LeBron, Kevin Love and Kyrie would be the team to finally bring a championship to Cleveland, yet in Game 1 Love was nowhere to be found on the court, healing a shoulder injury from earlier this post season. Irving ended up leaving the court after going down with a shaky left knee only three minutes into overtime.

Irving then told ESPN reporter Brian Windhorst: “You can hear in the tone of my voice that I’m a little worried. I just want to make sure everything is OK, and I’m going to take the necessary steps to see what’s going on.”

Though as of now the Cavaliers have said that there is no ACL or MCL damage, the question now is whether or not Irving will be able to return before Sunday’s Game Two. Throughout the post season his knee and it’s health have been on going story lines but they now take on a new urgency; the Cavs are just coming off an eight day rest which apparently didn’t help the knee so what is their move now?

Responses have been mixed from Irving and the Cavs organization: On the one hand, the Cavs keep referring to the knee injury as “tendinitis” and yes, head coach David Blatt did play Irving for 44 minutes on an injured knee but who’s to say he wouldn’t have gotten injured in the 38th if Blatt were to take him out earlier? Both sides are interested in Irving’s long term health; the Cavs have $80 million invested in Irving’s contract across the next five years, and Irving has a long career and his personal health to monitor. Only Kyrie Irving can tell us how bad Kyrie Irving’s knee really is. 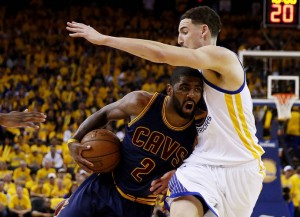 The question of an injured Irving also raises the more immediate questions of who is going to take the burden off of LeBron to score and also, did the Warriors just show us that they can take the Cavs best and still win? Kevin Love is already sidelined for the rest of the season, J.R. Smith is playing about as well as Ray Charles judging a beauty pageant, and only one healthy player besides LeBron is putting up double digit points (Mozgov had 16 last night). The Warriors must be heading into Sunday feeling a larger cushion than a one game lead would have you believe.

The Warriors still have the monumental task of stopping one of the best basketball players on Earth though; even with a true shooting percentage of just over 50 percent James was able to drop 44 points on Golden State in Game One and he is sure to feel even more pressure to carry the team with their dearth of injuries. Cleveland only played eight players last night and last night three of those eight contributed all of 2 or less points to the team.

Game 2 is sure to be a great one in this series and you can watch it on Sunday, June 7 on ABC at 8 p.m. It’s a home game for the Warriors and the Oracle Center is known to be one of the rowdiest home crowds in basketball.