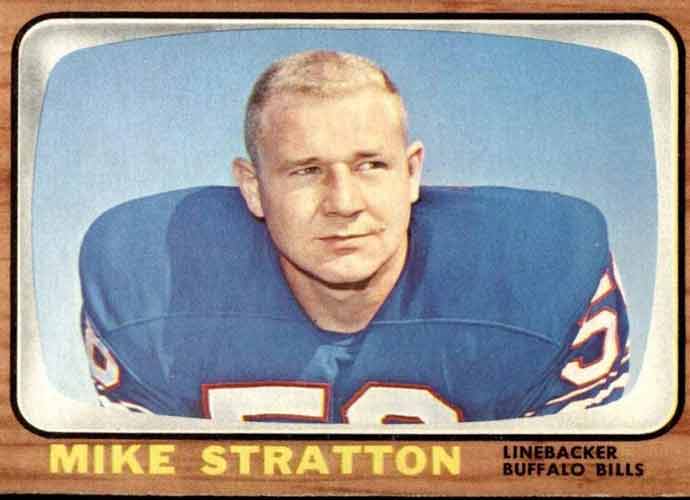 Former Buffalo Bills linebacker Mike Stratton, best known for the “hit heard ’round the world’ in the 1964 AFL championship game, has died at the age of 78.

The longtime Bills linebacker, a Wall of Fame inductee and a member of the Bills’ 25th and 50th-anniversary teams, died on Tuesday of heart complications following a recent fall according to the team.

General manager Dick Gallagher selected Stratton in the 13th round of the 1962 AFL draft. He came in as a rookie and immediately locked down an outside linebacker position. He stayed there for 11 years. Stratton helped lead the Bills to two AFL championships while playing in the AFL all-star game six times. He finished his career with 21 interceptions, 18 as a Bill, before making three in his last season while playing for the Chargers in 1973.

Stratton authored one of the most famous plays in team history during the 1964 AFL championship game. His picture-perfect tackle of San Diego running back Keith Lincoln was called “the hit heard ’round the world,” which not only broke a couple of Lincoln’s ribs and knocked him out of the game but turned the tide that day at War Memorial Stadium. Down 7-0 at the time, the Bills rallied after Stratton’s tackle to win their first title, 20-7 over the Chargers.

“You can always tell when you get a good lick; I just didn’t know it would have that kind of effect,” Stratton said in 1994. “Thirty-five years later, I’m proud that people remember it. They’ve got a better memory than I do.”

What set him apart from so many linebackers of his era was his speed. Very few had the ability to go sideline to sideline to make plays the way the 6-foot-3, 230-pound did.