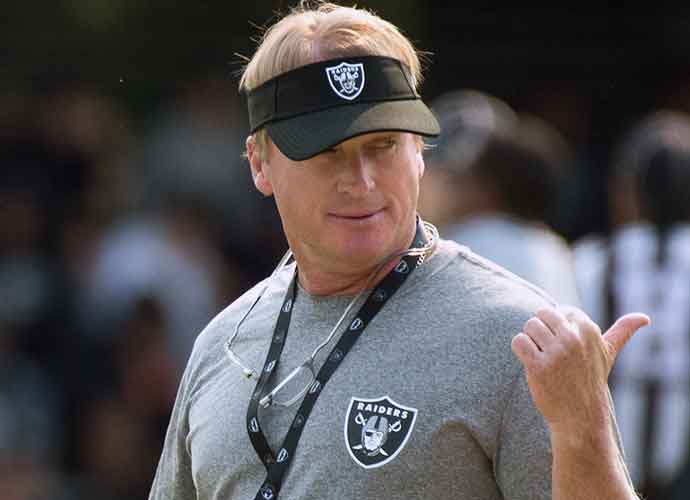 The former NFL player and now current NFL analyst went on ESPN’s morning show Keyshawn, Jwill & Max to speak out on his feelings against his former coach. As Johnson, who was coached by Gruden in 2002 and 2003 when he was with the Tampa Bay Buccaneers, experienced first hand the real Coach Gruden.

“He’s just always been a fraud to me…from day one he’s been a used car salesman and people bought it.”@keyshawn reacts to Jon Gruden’s resignation from the Raiders. #KJM pic.twitter.com/iVu7vlJCjk

“And people bought it because he inherited a championship team built by Tony Dungy and Rich McKay [Dungy was the Buccaneers head coach from 1996-01; McKay was the former Buccaneers general manager from 1994-03), and he came in there with a little bit of different energy than we had with Tony and it kind of kicked us over the top to get our world championship — which I am grateful for. But at the same time, I also saw through who he was, through that journey of getting a championship.”

Johnson then recalled the time the Tampa Bay Buccaneers won the National Football League championship, and Gruden took away the trophy from then-general manager McKay. “Think about it — we won the championship and we’re standing on the podium in the Super Bowl and the general manager’s trying to raise the trophy and the head coach takes the trophy from him, basically says, ‘Give me this, this belongs to me,” he said.

Johnson recalled the way Gruden would talk behind everybody’s back. “And he didn’t know that the players knew, but players are close to assistant coaches,” he said. “Patting you on the back on the practice field and then going inside of the coaches’ offices and film room is shredding you to pieces, and then see you 30 minutes later and act like y’all getting ready to go to dinner.”

"Man this dude is a fraud. Y'all don't seem to understand he's selling you on something and you're buying it. He's been doing that for years. … Talking behind people's backs, that was one of his traits in Tampa." pic.twitter.com/aKdMwhWPq2

After the 2003 season, Johnson was traded to the Dallas Cowboys.