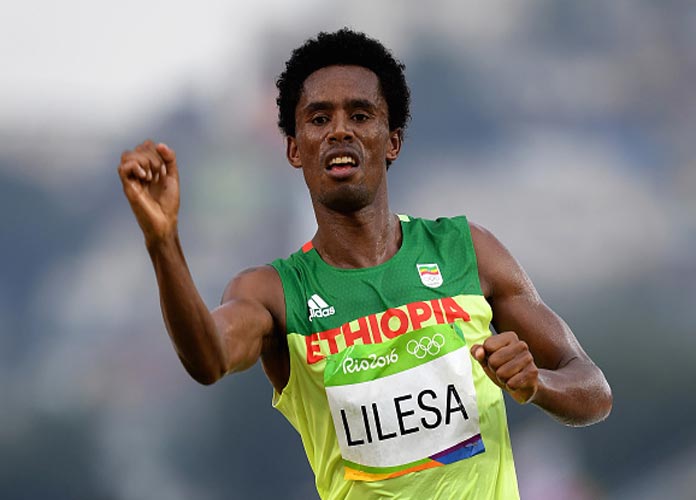 RIO DE JANEIRO, BRAZIL - AUGUST 21: Feyisa Lilesa of Ethiopia celebrates as he crosses the line to win silver during the Men's Marathon on Day 16 of the Rio 2016 Olympic Games at Sambodromo on August 21, 2016 in Rio de Janeiro, Brazil. (Photo by Matthias Hangst/Getty Images)

Ethiopian marathon runner, Feyisa Lilesa, crossed the finish line and raised his arms above his head in an ‘x’ symbol with his arms joining at his wrists and each hand clasped in a fist. He was showing solidarity towards his native group, the Oromo people of Ethiopia, for the government’s prosecution of his people.

He did the same at the press conference after the race. According to CNN he said he wanted to draw attention to the Ethiopian government’s continued prosecution of the Oromo people and that by bringing the issue to an international stage he cannot return home for fear he will be killed or put in jail.

Some of his family members are in prison and he is now concerned about the safety of his wife and two children, Lilesa said. He said he may stay in Brazil or try to go to Kenya or the United States depending on if or where he can get a visa.

According to CNN Amnesty International said at least 5,000 Oromos were arrested because of peaceful protest or opposing the government between 2011 and 2014. Since November 2015 security forces have used lethal force to break up about 500 protests.

The Oromo make up about one third of Ethiopia’s 100 million people and have been suppressed for decades but it has worsened recently as the government has taken control of Oromo farmland.

In the past, athletes who use the Olympics as a platform to speak out about political issues have had their medals stripped. Tommie Smith and John Carlos gave the black power salute on the podium in 1968 and had their gold and bronze medals stripped. It hasn’t been determined whether Lilesa will have his medal taken away. Lilesa won the silver medal with a time of 2:09:54 behind Kenya’s luid Kipchoge with a time of 2:08:44.

RIO DE JANEIRO, BRAZIL – AUGUST 21: Feyisa Lilesa of Ethiopia celebrates as he crosses the line to win silver during the Men’s Marathon on Day 16 of the Rio 2016 Olympic Games at Sambodromo on August 21, 2016 in Rio de Janeiro, Brazil. (Photo by Matthias Hangst/Getty Images)