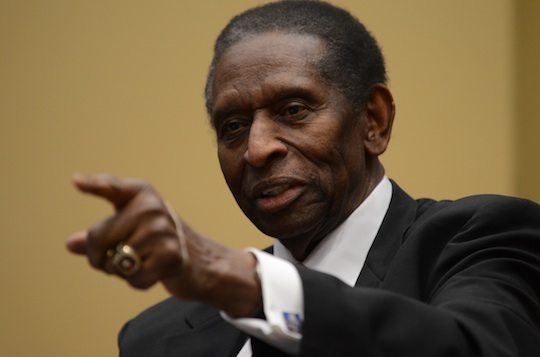 Earl Lloyd, who broke the color barrier in the NBA by becoming the first black player to play in a game in 1950, died on Thursday. He was 86. His alma mater, West Virginia State, and the NBA confirmed the news last night.

Lloyd made history on October 31, 1950 by stepping on the court for the Washington Capitols against the Rochester Royals. By doing so, he broke the NBA’s color barrier and laid the ground for other black players to enter the league. Lloyd spent nine seasons in the NBA, averaging 8.4 points and 6.4 rebounds a game with Washington, Syracuse and Detroit. While with the Syracuse Nationals, he and Jim Tucker became the first black players to win a championship when they won the 1955 NBA Finals. Lloyd also missed a season to serve in the US Army during the Korean War and had a stint as the Detroit Pistons’ head coach from 1971-1972.

In 2003, Lloyd was inducted to the Basketball Hall of Fame as a contributor. He had spent his final years in Crossville, Tenn. Lloyd leaves behind a wife, three sons, and four grandchildren.

Read more about:
basketball Earl Lloyd NBA
Listen to the uInterview Podcast!
Get the most-revealing celebrity conversations with the uInterview podcast!