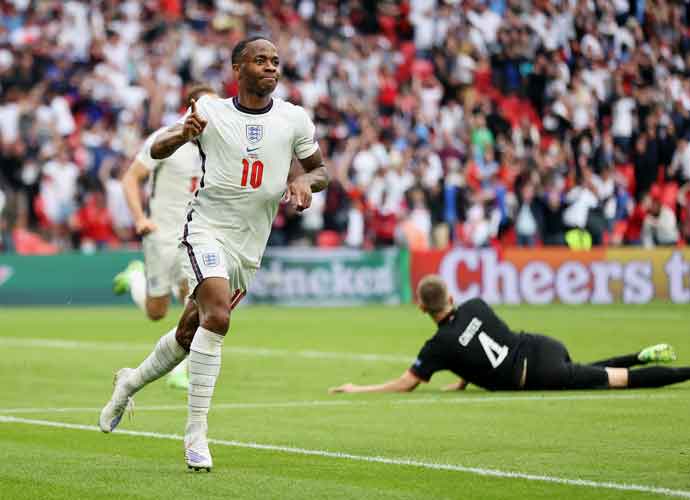 LONDON, ENGLAND - JUNE 29: Raheem Sterling of England celebrates after scoring their side's first goal during the UEFA Euro 2020 Championship Round of 16 match between England and Germany at Wembley Stadium on June 29, 2021 in London, England. (Photo by Eddie Keogh - The FA/The FA via Getty Images)

England was able to defeat Denmark by a score of 2-1 in extra time, clinching their first finals berth in a major men’s tournament in 55 years. However, the win was not without a host of controversies that muddied the legitimacy of the match.

The first controversy came when Raheem Sterling was dribbling the soccer ball down the wing before being “fouled” in the penalty box. This led to the winning goal. As he dribbled down the wing, a second, identical silver ball emerged next to where Denmark’s defender was guarding Sterling. This arguably distracted the defenseman, who then was unable to play properly, losing mental focus and his positioning. This part of the play was reviewed by VAR, however, it was determined that this incident did not interrupt the sequence of events on the pitch in a meaningful manner. Interestingly enough, section 5.3 of The International Football Association Board’s Laws of the Game states that the play should be stopped in this instance.

The second controversial decision was rewarding Sterling with a penalty kick. Sterling was lightly grazed by the leg of Denmark defender Joakim Maehle. Sterling then fell to the ground, but the widespread consensus was that no penalty kick should have been given based on the nature of the contact. Even though VAR has the ability to overturn this call, it can only do so if there is an error so egregiously erroneous that there is no doubt it was the incorrect decision. Because it was not undebatably a penalty, the call stood.

The final controversy in the game came when Harry Kane lined up to take the awarded penalty kick. A laser pen was flashed in the face of Denmark’s goalkeeper, Kasper Schmeichel. Although Schmeichel did save the kick before being beaten by an unlucky rebound, the effect of the laser is unknown. UEFA can take action should they find it prudent once they analyze the referee’s postgame report. Lasers are considered a prohibited item at the 2020 Euros, and hosts of the event can face penalties for allowing such items in.

Despite all this, a win is a win. England will move on to the finals to take on Italy. Italy defeated Spain on Tuesday in a penalty shootout.