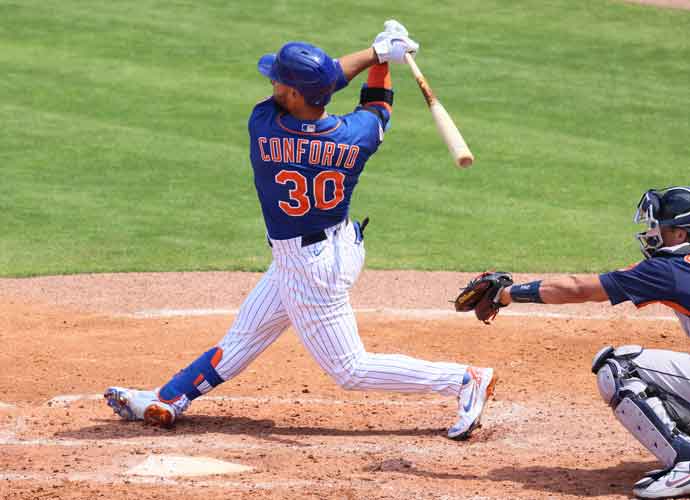 On Thursday, the New York Mets faced off against the Miami Marlins in what seemed to be a normal game, until a controversial finish.

In the bottom of the ninth inning, with one out and the bases loaded, the game was tied at two. Mets slugger Michael Conforto had the opportunity to win the game. All Conforto has to do was get a hit (or even a sacrifice fly) off Marlins’ acting closer Anthony Bass. A Mets victory was looming, but Conforto soon found himself in a 1-2 count. All Bass had to do was get another strike to get the second out.

Bass threw an 84 mph slider to the upper-left of the strike zone. Conforto began to swing at the pitch and it appeared that he struck out. However, the umpire called it a hit-by-pitch. The hit-by-pitch call allowed New York to secure a 3-2 win.

Everybody, including the SNY Mets broadcasters, thought that it was a strikeout and were baffled by the call. The broadcasters then realized that Conforto made no effort to move from the pitch and intentionally got hit to win the game.

MICHAEL CONFORTO GETS HIT BY A PITCH AND THE METS WIN IT 3-2!!!!! pic.twitter.com/R1QdgiRQJ5

Marlins manager Don Mattingly immediately charged out of the dugout to argue with the home plate umpire Ron Kulpa to review the play. The umpire crew decided to review the play, and after 58 seconds of review, the call still stood.

While the umpires were reviewing the play, the broadcasters were replaying the final pitch, and they agreed it was a strikeout. The slowed-down replay showed Conforto sticking his elbow out to get the win.

After the game, Conforto spoke to the media about the controversial finish. “A win’s a win,” he said. “It’s over, but I’d like to use the bat next time for sure,” the outfielder added.

Michael Conforto discusses the final play of the game: