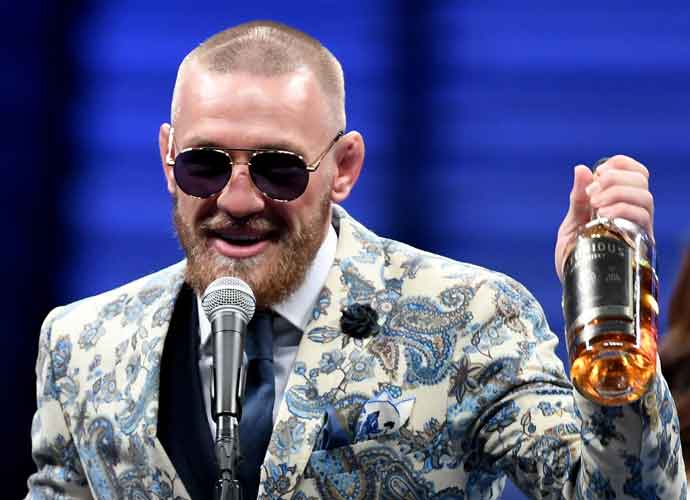 LAS VEGAS, NV - AUGUST 26: Conor McGregor speaks during a news conference while holding up his Notorious-branded Irish whiskey after his loss to Floyd Mayweather Jr. by 10th-round TKO in their super welterweight boxing match on August 26, 2017 at T-Mobile Arena in Las Vegas, Nevada. (Photo by Ethan Miller/Getty Images)

UFC star Conor McGregor and his business partner sold their majority stake in Proper No. Twelve Irish Whiskey to Proximo Spirits in a deal that is worth up to $600 million.

Proximo Spirits is a company that owns Jose Cuervo and other alcohol brands that acquired the majority stake in Proper No. Twelve. Proximo already had a 49% stake in the company. The $600 million earned in the deal will go to brand co-founders McGregor, his agent Audie Attar and their trade partner Ken Austin.

Austin told Shanken News Daily that it was their plan all along to have Proximo eventually buy a majority stake in the company. “When we started this business with Proximo, we basically laid out, I’ll call it certain hurdles, that would allow them to buy pieces of the company over time,” Austin said. “We hit a milestone and it gave Proximo the opportunity to own a significant stake.”

Mike Keyes, Proximo’s CEO, revealed that McGregor will still play an active role in the Irish whiskey brand. “Since introducing this brand with Conor and his partners just two and a half years ago, Proper No. Twelve has been the most exciting brand in the Irish whiskey category,” Keyes said. “The brand continues to grow at an unprecedented rate, and this agreement reflects Proximo’s commitment to expanding its presence in the whiskey category as a whole.”

The Irish fighter made a social media post following the deal with Proximo. “Wow!! In just under 3 years, we went from a dream to the biggest Irish Whiskey in the world!” McGregor said. “A HUGE step for Proper No. Twelve today as we now forge ahead”

“Proper Twelve is my baby for life, and I am just warming up the barrels here!” the UFC fighter wrote. “What I have in store for you all will not only take Proper Twelve to the absolute pinnacle of Irish Whiskey! But of all spirits!”

Wow!! In just under 3 years, we went from a dream to the biggest Irish Whiskey in the world!
A HUGE step for Proper No. Twelve today as we now forge ahead… ❤️https://t.co/TZCI18YdZ2 pic.twitter.com/7PbMQv7QXN