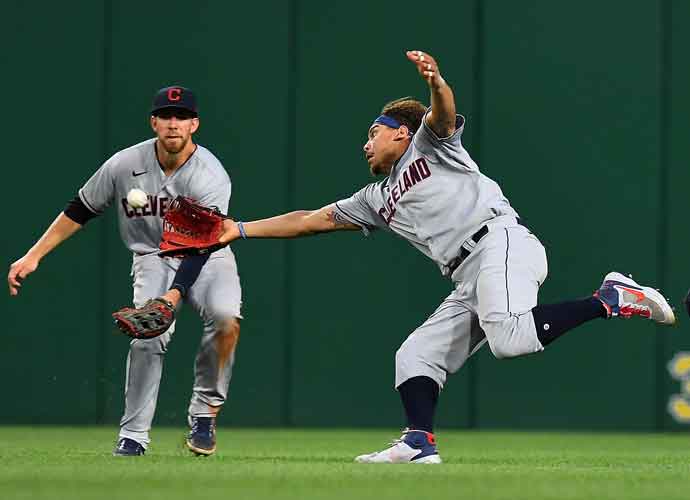 PITTSBURGH, PA - JUNE 18: Josh Naylor #22 of the Cleveland Indians makes a diving catch on a ball hit by Colin Moran #19 of the Pittsburgh Pirates (not pictured) during the sixth inning at PNC Park on June 18, 2021 in Pittsburgh, Pennsylvania. (Photo by Joe Sargent/Getty Images)

There was a scary moment over the weekend in Major League Baseball, as Cleveland Indians right fielder Josh Naylor and second baseman Ernie Clement were chasing a popup. The two defenders smacked into each other, a scary moment that left Naylor with a significant injury and both dugouts shaken.

Josh Naylor suffered "a closed fracture and dislocation of the right ankle" on Sunday. He'll travel back to Cleveland today. He'll be evaluated later this week to determine the extent of the injury and timetable for an operation.

After an 8-2 loss to the Minnesota Twins, Indians manager Terry Francona said Naylor had suffered a broken bone — but he wasn’t sure which one — and was being treated at a hospital. “That’s obviously playing out in front of anyone’s eyes,” Twins manager Rocco Baldelli said. “You can’t, you know, once you see that, you’re not going to unsee it, and it brings out feelings, too, and it’s hard for people to sometimes regardless of what team you’re on, refocus, and there’s a lot of people that care about that young man, and we’ll be thinking about him as time goes on.”

Naylor went flying and spinning after the collision and had his right foot catch underneath him, twisting the foot the wrong way. Teammates immediately called for medical attention with Naylor writhing on the ground in agony. He was taken off the field on a stretcher with his right foot in an air cast. “It’s hard,” Francona said. “You saw the way he reacted. It’s hard to not react to that. Everybody’s certainly thinking about him. I was worried about Ernie, too, because Ernie had a pretty good cut on his chin.”

Indians catcher Rene Rivera also had this to say on the matter: “To be honest, it was really, really hard. The way he reacted, it was heartbreaking, man. It’s hard. A guy like him, nice guy in the clubhouse, really a lot of energy, positivity, and to see him go through that was really tough. You can tell the teammate, the full dugout was really shook.”

Francona further commented on the matter. “On the replay, Naylor, I think, was going to catch it right about shoulder height. So, he’s got to call it. The second baseman, he’s going until he hears something. So, there’s got to be some communication there, and I don’t believe there was.”

The timetable for Naylor’s return is unknown, but it is likely that he is looking at a lengthy absence.