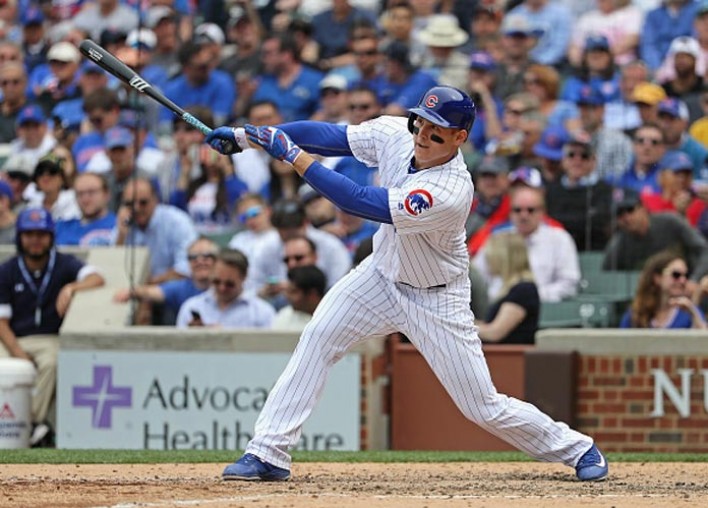 CHICAGO, IL - MAY 13: Anthony Rizzo #44 of the Chicago Cubs bats against the Pittsburgh Pirates at Wrigley Field on May 13, 2016 in Chicago, Illinois. The Cubs defeated the Pirates 9-4. (Photo by Jonathan Daniel/Getty Images)

This week the Chicago Cubs hit a rough stretch in terms of travel and first baseman Anthony Rizzo wasn’t too happy about the way the league handled the team’s schedule.

The MLB decided to schedule a makeup game on Thursday after Sunday’s game against the Washington Nationals was canceled due to rain. Thus making it the 24th consecutive gameday on the Cubs schedule.

The Cubs had to jump on a plane Wednesday after their 5-1 loss at home to the Milwaukee Brewers and fly to Washington, D.C. to play a makeup game against the Nationals.

On the plane, slugger Rizzo decided to wear his full uniform and called MLB’s decision to schedule the game “kind of a joke.”

“I was just kind of having fun throughout a tough stretch in the season,” Rizzo told reporters. “I mean, we’re flying into a state of emergency with rain in the forecast. It’s kind of a joke, so why not keep joking around about it and just have fun?”

Cubs manager Joe Maddon commented on Rizzo’s statement by saying he wished he had learned of his player’s opinion sooner.

Instead of waiting until the end of the season to make up the game, the MLB opted to send the Cubs to D.C. Thursday despite the potential threat of inclement weather from Hurricane Florence.

The game ended at 8:00 p.m. local time, at which point the Cubs had to jump right back onto another plane and fly home to host the Cincinnati Reds Friday at 8:05 p.m. EST. Rizzo said he did not bring a change of clothes and will wear his full uniform again on the trip back to Chicago.

Anthony Rizzo didn’t see the point of packing for a one-day trip, so he wore his #Cubs uniform on the flight to D.C. https://t.co/spTBg14Ryk pic.twitter.com/fX0dbjWeij

“At the end of the day, our front office, our owner, they have our back,” Rizzo said. “We’re in a long stretch of games. There’s people in MLB that have been on the players’ side. They understand the human element of it, and they seem not to care at all. So it is what it is. We can sit here and complain about [it], or we can joke about [it]. I’ll take the joking around part—a lot more fun.

The Cubs don’t have another off-day until Sept. 20, which puts them into a 30-day stretch without a single day off.