Brett Maher Misses Record Number Of Extra Points – Is It Time For Cowboys To Panic At Kicker? - uSports.org 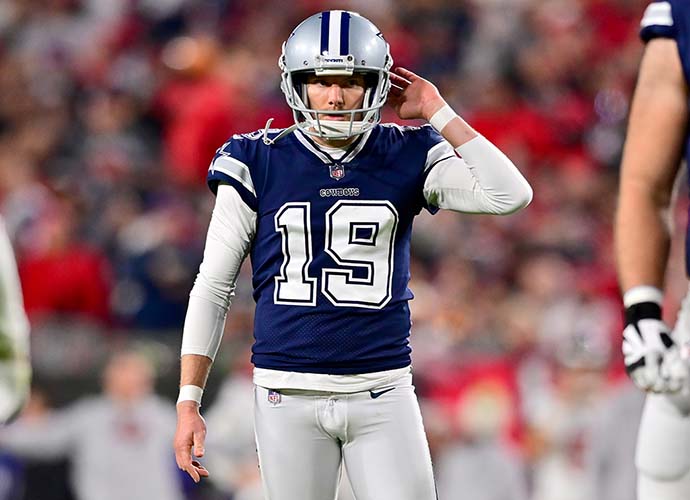 TAMPA, FLORIDA - JANUARY 16: Brett Maher #19 of the Dallas Cowboys reacts after missing an extra point against the Tampa Bay Buccaneers during the third quarter in the NFC Wild Card playoff game at Raymond James Stadium on January 16, 2023 in Tampa, Florida. (Photo by Julio Aguilar/Getty Images)

The Dallas Cowboys are hoping it does not have a big problem at kicker for the rest of the playoffs despite a big win against the Tampa Bay Buccaneers on Monday Night Football.

Brett Maher, who has been nothing but reliable for the team for most of the season, missed an astounding four extra points in a game.

That broke the record for most in a playoff appearance and it was reportedly the highest number of failed attempts since 1932.

Luckily for the Cowboys, it did not cost them the game, as the team won comfortably by 17 points.

And at least for now, the organization is backing him publicly despite the chipshot misses.

Owner Jerry Jones said that team won’t be looking to add a kicker despite the performance.

However, should the Cowboys be concerned after missing all of those chip shots?

This will depend on the reason why he missed them.

If he suffered an injury – then the Cowboys could be in big trouble.

In games that are decided marginally – kickers can make a big difference – especially in the playoffs.

If it’s mentally related, which Jones seemed to indicate, then Maher might be able to rebound with a solid week of practice.

“This is a classic case of looking at what he’s done for this team and done on the field all year, not just last night,” he said.

“And, so, kicking is a technical thing. It has everything to do with the — just frankly mentally having it all together when you step up there. And, so, we’ll read this thing as the week goes along. I don’t want to get out over skis and get ahead of it.”

In the regular season, Maher successfully made 29 out of his 32 kicks – which is more than 90% efficiency.

If the Cowboys do decide to pursue a kicker – there likely aren’t any great options to sign at this point of the season.

So the team will hope that Monday night’s meltdown was a one-time freak thing and that he will return to his old self going forward.

The Cowboys will play the San Francisco 49ers on Sunday at 6:30 p.m. ET in the NFC divisional round of the playoffs.