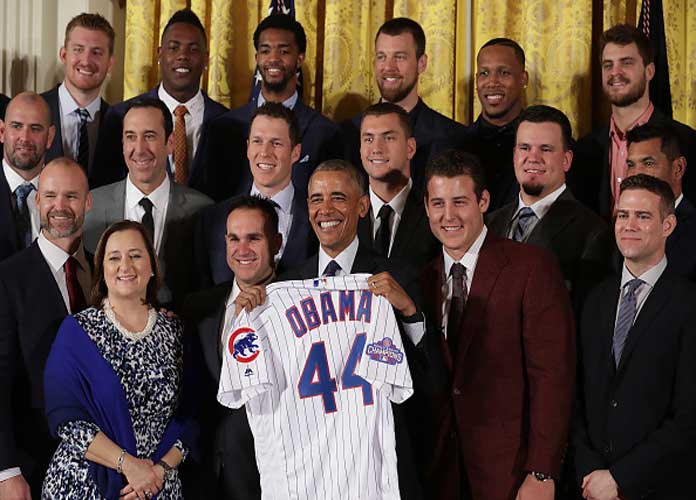 WASHINGTON, DC - JANUARY 16: U.S. President Barack Obama poses for photograph with the Major League Baseball World Series champion Chicago Cubs during a celebration in the East Room of the White House January 16, 2017 in Washington, DC. Obama made sure to celebrate the Cubs' victory at the White House during his last week in office because they are from his adopted home town of Chicago. (Photo by Chip Somodevilla/Getty Images)

As if celebrities and billionaires weren’t giving Robert Sarver’s Phoenix Suns sale enough attention, a recent report suggests that a former POTUS may be throwing his hat in the ring.

Barack Obama is rumored to be part of a group looking to buy the team, which could reportedly sell for $4 billion.

Since 2008, Obama has always eagerly expressed an interest in sports, and even appeared on the Manningcast Monday when the Chicago Bears took on the New England Patriots. It turned out to be a busy week in sports for Obama, as Bill Simmons reported the president’s rumored interest in the Suns in a new episode of his podcast with Charles Barkley Tuesday.

Barkley wouldn’t be involved in a Suns ownership group unless…pic.twitter.com/qUwNG0gjND

“I heard Obama’s involved in one of the groups,” Simmons said. “That’s the one guy I feel like, they would make him the actual face, and the money guys would be so happy to have him at the front that they would just be like, ‘Cool.'”

Since Sarver elected to sell the team following his suspension for extensive workplace misconduct, speculation about the next owner has run rampant. If Obama is involved in a group looking to buy the Suns, he would join a long list of big names connected to the team, including Jeff Bezos and Bob Iger.

Unlike those two and others who could buy the team outright, Obama would likely serve as a minority contributor to a larger ownership group. This is a popular strategy for many celebrities, individuals with considerable income and name recognition who do not have enough to buy teams themselves. As Simmons suggested, Obama would also serve as a compelling representative for the potential group.

The thing I love MOST about President Obama draining this three-pointer and saying "THAT'S WHAT I DO," is that he did it while WEARING A MASK.

Though there are no solid connections between Obama and a bid to own the Suns, it would be a big step in the former president’s life after politics. His love of the sport is widely known — shortly after taking office, he adapted the White House’s tennis courts to accommodate basketball hoops.

Though Obama would not be able to offer nearly as much on his own as some of the billionaires in line to enter a bid, it’s hard to imagine a more valuable face to represent an investment group. The bidding war for the Suns would intensify even further.