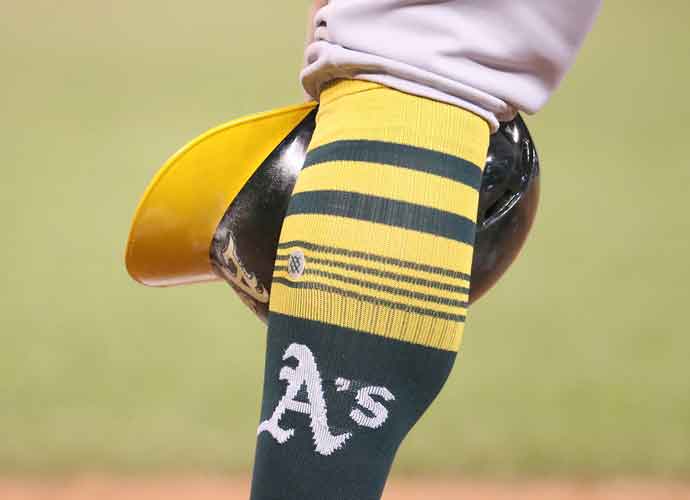 TORONTO, ON - APRIL 28: Robbie Grossman #8 of the Oakland Athletics waits during a pitching change as he rests his helmet beside his sock showing the team logo in the eleventh inning during MLB game action against the Toronto Blue Jays at Rogers Centre on April 28, 2019 in Toronto, Canada. (Photo by Tom Szczerbowski/Getty Images)

A nonbinding vote will be made by eight Oakland city officials on a $12 billion development and ballpark plan. Receiving an affirmative vote will keep the hope alive for the Oakland Athletics to remain in Oakland, but a dissenting vote will begin the process of the team’s relocation.

Dave Kaval, President of the A’s, was extremely uncertain which way the vote would go. “Our future in Oakland is hanging in the balance and we are doing everything we can to get a ‘yes’ vote tomorrow on our plan and keep the A’s rooted in Oakland. But we don’t know if we’re gonna get a positive vote. There’s still a lot of areas we’re apart significantly with the city, and we go into the vote not knowing how it’s gonna play out.”

This process has gone on for two decades as the team has tried to secure a brand new stadium in the Bay Area. MLB commissioner Rob Manfred recently referred to this vote after the prolonged process as “the end.” Several locations have been denied such as San Jose and other locations in Oakland, while renovations of the Coliseum have been deemed nonviable.

The A’s have made public proposals for a new stadium in Oakland for the cost of about $1 billion including $450 million in community benefits, with an $11 billion additional cost to build up the surrounding community. The city of Oakland made a counterproposal. “Lacks details and specifics and really doesn’t answer any of the questions that we have that need to be addressed to continue to move forward,” said Kaval about the counter.

Kaval has been at the forefront of the A’s stadium efforts since 2016. He was not pleased with the shortage of money the A’s would be forced to cover.

“That’s an extraordinary sum of money. And not having specificity is a key concern. There’s also concern about additional taxes that they’re putting on the project — condo transfer tax, a transportation tax that obviously push up the cost, as well. Those are all items that are problematic. And we’ve been clear that the project can only do so much. We can’t solve all of Oakland’s problems, but we can do a lot to make this a better community and keep the A’s here for many generations to come. And that’s why we’re looking for an affirmative vote on our plan.”

“Hopefully it goes in our direction. I’d love to stay in Oakland. I hope the team stays in Oakland. We have a long, rich history here. I think that’s the case with anybody who’s either grown up here or lives here or is an Oakland A’s baseball fan or a player,” said A’s manager Bob Melvin.

Justin Berton, a spokesperson for Oakland’s Mayor Schaaf, released a statement after the Mayor Office refused to provide comments to ESPN. “The City and the A’s are continuing their dialogue today with the shared goal to make a world-class ballpark a reality. The City will continue to advocate for a proposal that supports and serves Oakland and our entire region, provides affordable housing, public parks, great jobs and other direct benefits for the community — all without risk to our Port, our taxpayers, or the City or County’s general funds.”

“In many ways, we’re down to our last at-bat in Oakland. But if we get a win tomorrow, and an agreement we agree with, we can send it into extra innings and hopefully get the final victory in the fall,” said Kaval referring to the vote.