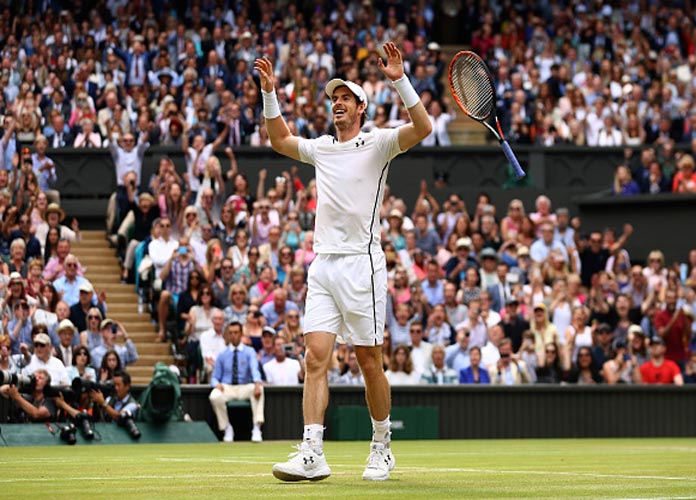 LONDON, ENGLAND - JULY 10: Andy Murray of Great Britain celebrates victory during the Men's Singles Final against Milos Raonic of Canada on day thirteen of the Wimbledon Lawn Tennis Championships at the All England Lawn Tennis and Croquet Club on July 10, 2016 in London, England. (Photo by Julian Finney/Getty Images)

With the win, the top-seeded American also matched German Steffi Graf’s record for the most Open era Grand Slam titles won by a female player (22).

Kerber– who defeated Serena in the final of the 2016 Australian Open in January– put up a resilient fight against Williams, but the 34-year-old American’s serving prowess ultimately proved too difficult for the German, who had not lost a single set entering Saturday’s final.

Kerber came close to losing her serve on Centre Court at the first time of asking after letting her opponent serve first, saving three break points to stay level.

The official Wimbledon Twitter account posted evidence of just how impressive the world No. 1 was in the early exchanges. After leading 4-3 in the opening set, Williams had already recorded five aces, 16 winners and only eight unforced errors.

Serena posting some excellent numbers but Kerber’s holding her own. On serve at 4-3. pic.twitter.com/CvzSNNVGsa

Williams suffered a slip in the ninth game after her toes got caught on the playing surface and she appeared to roll her ankle, thus drawing concern. However, this seemed to barely affect the match as the score became tied at 5 games apiece.

Serena then timed the first break of the match perfectly. Despite Kerber saving a set point at 40-15 down, Williams took the crucial lead.

In the seventh game of the second, Kerber snatched a 40-30 lead for the first time in the match. Williams was at risk of conceding a break for the first time, but still the American thundered back with three points in succession to end the challenge quickly.

The pivotal break came when a rare, wild error from Kerber let Williams gain a 5-3 game lead before serving out the win, her seventh Wimbledon title in straight sets.

For the third time in her career, Williams has earned back-to-back Wimbledon titles. It would mark a first for the American if she could complete a hat-trick in 2017.

Kerber took the time to praise her opponent after the match.

“First of all, I would like to say congrats to Serena. I mean, you really deserve the title and your next title,” the German said in her post-match comments. “You are a great champion, you’re a great person, and it’s always an honor for me to play against you in the finals. We played a great match and congrats, you deserve it, so really well done, Serena.”

Just over six weeks now remain until the U.S. Open kicks off on August 29, where Williams can hope for a chance to win yet another title.

The 29-year-old No. 2 Brit — the heavy favorite to win the final– sat in his chair on Centre Court sobbing into his towel as the awards ceremony began.

Murray, who had humble beginnings, won his first Wimbledon title in 2013, and lost in the final to Roger Federer one year before that.

“I’ve had some great moments here and also some tough losses,” Murray said Sunday, holding the trophy close. “And obviously the wins feel extra special because of the tough losses.”

For all his achievement, he has yet to reach No. 1, and his record in Grand Slam finals coming into Sunday was an unprecedented 2-8, with all of those finals being played against either Novak Djokovic or Federer.

Raonic, the No. 6 seed, was sure to be a tough new opponent. He upset Federer in a five-set semifinal to become the first Canadian man to reach a Grand Slam singles final.

Murray did not crack on Sunday, however, making just 12 unforced errors over the three sets, limiting Raonic to just eight aces with his quick returns and routinely producing decisive passing shot combinations– especially off his backhand– as Raonic constantly charged the net, knowing he had a small chance of winning from the baseline.

“I think it’s phenomenal for him, to back up his win from three years ago,” said Raonic. “He’s been in many finals since then that he wasn’t able to make the most of. So for him it’s a big step forward. The next move is up to him. He’s got to go for it. There’s many other guys who will be trying to go for it as well. I know I will.”

Since Wimbledon in 2013, Murray has gone through back surgery and two different coaches before reuniting with his mentor Ivan Lendl last month. Murray was married to his longtime girlfriend, Kim Sears, last year, and she gave birth to their daughter, Sophia, in February.

“I’m playing for something a bit different now,” he said of Sophia in a post-match interview with ESPN. “Hopefully she’ll be proud of this one day.”

The Brit also said, however, that he views this as a more personal achievement than his 2013 title.

“I’m not suggesting this was only for me,” he said Sunday after showing off his trophy from the Centre Court balcony to thousands of fans gathered below. “I know it’s something bigger than that. But the last time it was such a big thing for a British man to win Wimbledon. It had been so long. I was so relieved that I’d done that.”

LONDON, ENGLAND – JULY 10: Andy Murray of Great Britain celebrates victory during the Men’s Singles Final against Milos Raonic of Canada on day thirteen of the Wimbledon Lawn Tennis Championships at the All England Lawn Tennis and Croquet Club on July 10, 2016 in London, England. (Photo by Julian Finney/Getty Images)