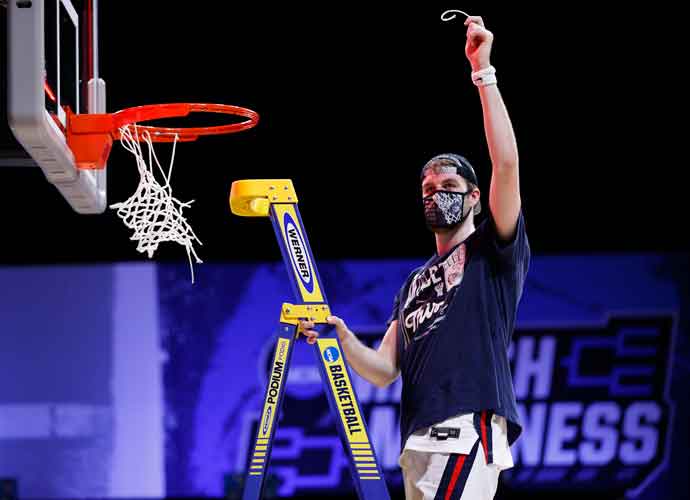 INDIANAPOLIS, INDIANA - MARCH 30: Drew Timme #2 of the Gonzaga Bulldogs cuts the net after defeating the USC Trojans 85-66 in the Elite Eight round game of the 2021 NCAA Men's Basketball Tournament at Lucas Oil Stadium on March 30, 2021 in Indianapolis, Indiana. (Photo by Jamie Squire/Getty Images)

This year’s March Madness, filled with upsets, shockers and Cinderella runs, is coming close to an end.

The NCAA men’s basketball tournament has now reached the Final Four, as two weeks of hard fought basketball had lead to three final games being played on Saturday (semi finals) and Monday (championship). Each region now has a champion, with Gonzaga (30-0) winning the West, UCLA (22-9) winning the East, Baylor (26-2) winning the South and Houston (28-3) winning the Midwest. These four teams will now battle it out to see who emerges as a national champion.

The first matchup, with a scheduled tip off of 5:14 pm on April 3, pits the No. 1 seed Baylor Bears of the South against the No. 2 seed Houston Cougars of the Midwest. The Bears have been dominant throughout the year, ranking within the top five in the AP poll during the course of the regular season. Despite falling short in the Big 12 tournament, they have cruised through the South region, winning all their games by nine or more points. They defeated No. 3 seed Arkansas in the Elite Eight, 81-72, to reach the Final Four. Led by strong defense, with an average of 17.3 forced turnovers per game in the tournament, as well as leading the nation in three-point shooting (41.1%), the Bears will be a tough out.

However, they go up against a Houston team that was top five in the nation in both offensive and defensive efficiency, the only team in the nation to do so. After a scare against No. 10 seed Rutgers in the second round, the Cougars have righted the ship and defeated No. 12 seed Oregon State, 67-61, to reach the Final Four. The Cougars’ slow-tempo style is also built to defeat a faster paced Baylor team. This matchup will be a very entertaining clash.

The second game, tipping off at 8:34 pm, is between the No. 1 seed Gonzaga Bulldogs of the West and the No. 11 seed UCLA Bruins of the East. The Bulldogs are the No. 1 overall seed in the tournament, and for good reason – they are (until proven otherwise) the best team in college basketball. They chase history this season, as they remain unbeaten with a 30-0 record. With two more wins they would become the eighth ever undefeated national champion, and the first since 1976. The Bulldogs have shown no sign of weakness in the tournament, blowing out opponents left and right, capped off by a 85-66 defeat of No. 6 seed USC for the West regional championship. The Bulldogs have a stacked roster, with sophomore forward Drew Timme leading the way with 21.3 points per game in the tournament. Along with Timme are senior forward Corey Kispert as well as five-star freshman point guard Jalen Suggs. Coming into this Final Four matchup as 14-point favorites, Gonzaga will be the ultimate test for any team looking for a championship.

That being said, never count out a Cinderella story, and that’s exactly what exists in the UCLA Bruins. From First Four to Final Four, the Bruins have an impressive resume of wins this tournament, most notably No. 2 seed Alabama in the Sweet 16 (88-78 in OT), and No. 1 seed Michigan in the Elite Eight (51-49). The Bruins are led by sophomore guard Johnny Juzang, who leads all players with 108 points scored in the tournament. UCLA will look to keep the game low-scoring, as they did against Michigan. They will have to keep the high-powered Gonzaga offense in check if they hope to have a chance in this game.

With history on the line, major upsets still possible, and exciting matchups ahead, this should be an entertaining final weekend of March Madness.