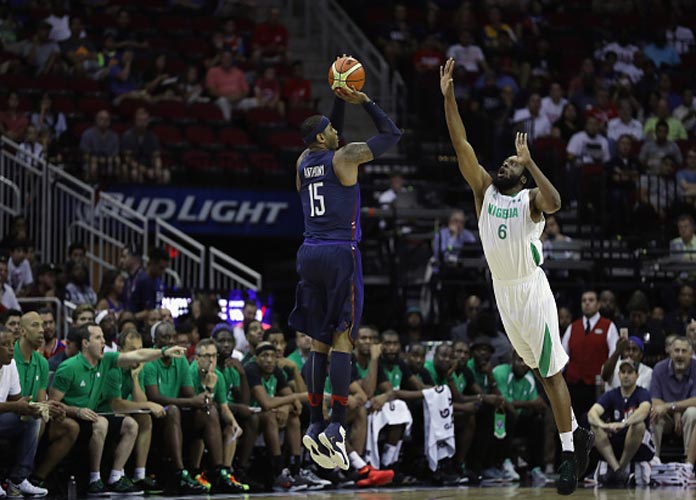 HOUSTON, TX - AUGUST 01: Carmelo Anthony #15 of the United States takes a shot against Michel Umeh #6 of Nigeria in a pre-Olympic exhibition game during USA Basketball Showcase at Toyota Center on August 1, 2016 in Houston, Texas. (Photo by Ronald Martinez/Getty Images)

Carmelo Anthony led the USA Basketball Men’s National Team to a thunderous 110-66 victory over Nigeria on Monday night in Houston, in their final exhibition game before heading to the 2016 Olympic Games in Rio.

Anthony finished with 19 points in just 19 minutes despite missing all six of his 3-point attempts. The last time he played Nigeria, the Knicks forward set the U.S. single-game scoring record at the 2012 London Olympics by sinking 10-of-12 3s in a 156-73 win.

“I set the bar too high,” Anthony said with a smile.

Although the U.S. did not match those record numbers before a sold-out crowd at the Toyota Center Monday, the defense proved to be strong.

Nigeria went just 4-for-29 on 3-pointers, while committing 20 turnovers.

“Obviously, they’re the No. 1 team in the world for a reason,” Nigeria coach Will Voigt said. “For us to shoot the percentage that we did from 3, and obviously, their defense is a big part of that, because they’re so good in transition, all of those misses led to big opportunities for them. They kind of feed off of that.”
The U.S. shot 53.9 percent from the field, including 13-for-33 from beyond the arc. Jimmy Butler and DeMar DeRozan each had four steals, and Kyle Lowry led the squad with 11 assists, including two major alley-oops to DeRozan and DeAndre Jordan.
“He’s a high-flyer, and he’s a guy who they say, ‘Just throw it up to him from anywhere,’ so that’s what I’m doing,” Lowry said, referring to the 50-foot pass thrown to Jordan from several feet behind the half-court line.
Six players scored in double figures for the U.S., with Klay Thompson scoring 17 points off the bench on 5-of-9 shooting from 3, Kevin Durant scoring 14 points on 3-of-4 from deep, DeRozan scoring 13 points and DeMarcus Cousins and Jordan both adding 10 points. The U.S. led 54-30 at halftime.
“We wanted to share the ball well and try some people with different positions and different lineups,” head coach Mike Krzyzewski said. “I thought we advanced, and I thought we got better tonight.”
Nigeria started off stronger, nonetheless. Ben Uzoh brought the players on the Nigerian bench to their feet with a dunk over Jordan in the first quarter, but the Americans gradually pulled away late in the period and kept increasing the lead from there.
Chamberlain Oguchi finally got Nigeria’s first 3-pointer with a little under 4 minutes remaining. He added three more from there and finished with 21 points.
The U.S. played without starting point guard Kyrie Irving, who rested a bruised left thigh he sustained when he was pushed on a pick in the Americans’ victory over Venezuela on Friday in Chicago. Also, Indiana’s Paul George missed a second game with a left calf injury.
Krzyzewski said both were expected to be fine for the Olympic opener against China on Saturday.
Lowry, who started for Irving, finished with eight points and eight rebounds.
The Americans previously defeated Argentina, China twice and Venezuela by an average of 42.8 points, scoring 101 per game. They play the Chinese again to open Olympic play on Aug. 6 and also meet Venezuela again.
Krzyzewski particularly praised his team for its defensive intensity. Even late into the fourth quarter with their lead hovering around 50 points, the U.S. was unforgiving on defense, forcing near shot-clock violations on nearly every possession.
No play or player got a louder reaction from the crowd than when TNT basketball analyst Craig Sager was introduced and shown on the videoboard. Sager, who has covered the Olympics since the 2000 Summer Games in Sydney, will be unable to travel to Rio amid his fight against leukemia. Sager is preparing for a third bone marrow transplant surgery.
“Every coach has things that he has to get done — I don’t look at it as a challenge,” Krzyzewski said. “A challenge is what Craig Sager is going through and how magnificently he’s going through it.”
Also present were Houston Rockets guards Eric Gordon and Patrick Beverley, as well as former Olympic gold medal winners Alonzo Mourning and David Robinson.
PHOTO: HOUSTON, TX – AUGUST 01: Carmelo Anthony #15 of the United States takes a shot against Michel Umeh #6 of Nigeria in a pre-Olympic exhibition game during USA Basketball Showcase at Toyota Center on August 1, 2016 in Houston, Texas. (Photo by Ronald Martinez/Getty Images)
Read more about:
2016 Rio Olympics exhibition game Nigeria USA Men's Basketball
Listen to the uInterview Podcast!
Get the most-revealing celebrity conversations with the uInterview podcast!