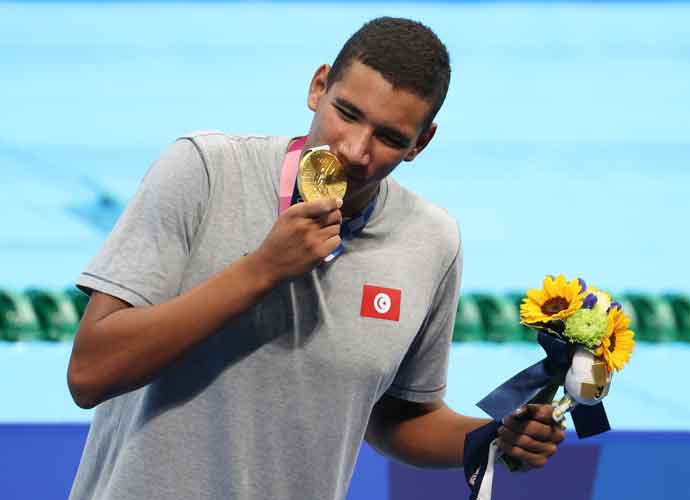 TOKYO, JAPAN - JULY 25: Gold medalist Ahmed Hafnaoui of Tunisia during the medals ceremony of the 400m freestyle final on day two of the Tokyo 2020 Olympic Games at Tokyo Aquatics Centre on July 25, 2021 in Tokyo, Japan. (Photo by Jean Catuffe/Getty Images)

Ahmed Hafnaoui was an unknown swimmer from Tunisia – at least he was until he made international headlines by snagging gold in the 400m freestyle during the Tokyo Olympics. Hafnaoui is just 18 years old.

Hafnaoui won with a time of 3:43.46. His qualifying round was the worst among those who made it to the final heat, forcing him to swim in lane 8. Nevertheless, Hafnaoui beat out Australian swimmer Jack McLoughlin by 14-hundredths of a second. Kieran Smith of the United States rounded out the medal podium by securing the bronze.

Hafnaoui was so shocked he could barely figure out where to stand on the podium. Smith had to move Hafnaoui to the middle between him and McLoughlin, the position typically taken by the gold medal winner.

When asked about how it felt to become a national hero, Hafnaoui was clearly still in shock. “I don’t know,” he stated.

Hafnaoui is hoping to swim at a university in the United States after he finishes competeting in Tokyo.