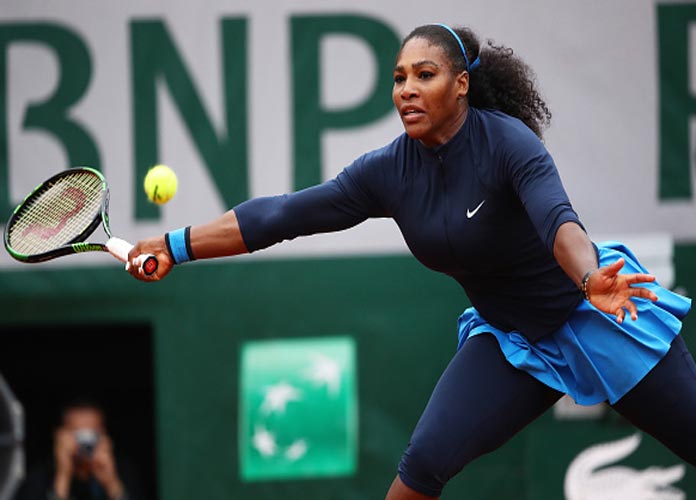 PARIS, FRANCE - JUNE 02: Serena Williams of the United States hits a forehand during the Ladies Singles quarter final match against Yulia Putintseva of Kazakhstan on day twelve of the 2016 French Open at Roland Garros on June 2, 2016 in Paris, France. (Photo by Clive Brunskill/Getty Images)

Serena Williams continued her quest this week to tie the All-Time Grand Slam Masters record of 24 Championship wins as she bested a player 20 years younger, Caty McNally, in the second round of the U.S. Open on Wednesday.

Williams won the match 5-7, 6-3, 6-1. Earlier this week, Serena Williams stated in her post-game interview in her win against Maria Sharapova that she “Was not letting her in the match.”

It sounds like McNally was listening. McNally started the set with aces and off-balance deep shots that kept her pretty centered, while Williams danced back and forth trying to return the ball. McNally seemed in charge in the first set right up to her third point, when Williams made her way back to 3-3 as she aggressively approached the net with a few volleys. McNally answered with similar aggressiveness to win the set 7-5 with a beautiful spot serve that landed on the center tram line of Williams’ corner and that she threw out-of bounds.

This was Williams’ one and only set loss in a US Open 2nd round. She had won all previous 36 sets.

But it would be McNally’s only such set, as Williams took over from there in a game that would last just under two hours. Although there were some great back-and-forth moments where McNally went 2-3 against Williams, Williams continued to be the aggressor towards the net, showing off her athleticism and ability to twist her body to shorten the court and not allowing her opponent to put the ball behind her.

Credit is due to the 17-year-old, as she kept up with Williams halfway through the contest while showing she was not intimated by the future legend. But it was all that animated Williams as she finished strong, winning the final set 6-1, as she put her foot on the gas and a few times even stared down her opponent after difficult plays.

It was quite an impressive debut for McNally, though, who was making her US Open debut. She won the doubles at the WTA with fellow teenager Coco Gauff. McNally’s current rank is 121st.

Serena Williams will play either Karolina Muchova or 29th-seed Hsieh Su-wei, depending on the winner.