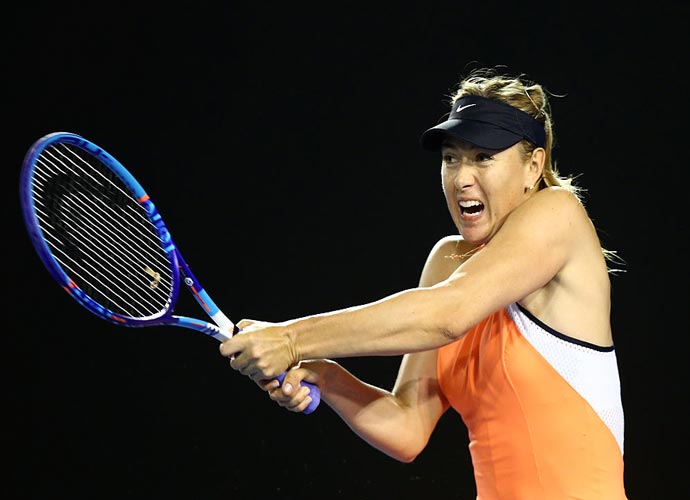 Maria Sharapova of Russia plays a backhand in her third round match against Lauren Davis of the United States during day five of the 2016 Australian Open at Melbourne Park on January 22, 2016 in Melbourne, Australia.

Former No. 1-ranked Maria Sharapova faced off against Anett Kontaveit, the 16th seed, in the Rogers Cup on Monday.

The round of 64 match was a tight series, with Estonian national Kontaveit just sliding by to advance to the round of 32. Kontaveit rallied from a set down to defeat her Russian opponent 4-6, 6-3, 6-4 at the Rogers Cup.

“I was just trying to take it point by point and not think about the score that much. It worked in the end,” said Kontaveit, according to Firstpost. Kontaveit converted her first point in the match when Sharapova sent a poor service return.

Sharapova is in a bit of a bad spell in form and has slipped into the No. 82 rank after battling a few injuries. She was out four months with a right shoulder injury that needed surgery.

“I’m still building the confidence and my form, and that’s something that’s just going to come with time and with match play,” Sharapova said, according to WTA Tennis. “Unfortunately, I just haven’t had that yet, so will just hopefully try to build on it.”

This was Kontaveit’s first match since losing dramatically in the first round of the women’s Wimbledon tournament last month. The two-hour, 42-minute match on Center Court was a heated fixture, as Kontaveit had to earn her win against Sharapova.

“It was a super close match, and I really felt the support of the crowd in the third set and in the end,” Kontaveit said after the match, according to WTA Tennis.

Kontaveit will next face either Venus Williams, the seven-time Grand Slam champion, or Spanish international Carla Suarez Navarro. They play their round of 64 match on Tuesday.

Sharapova will be looking to earn her confidence back after struggling in 2019 so far. “There’s never the perfect scenario. I’m going to be coming up against tough players, long matches, and there are always going to be tests,” she said, according to WTA Tennis. “And I always have to play my best tennis no matter who I play, so it will just take time to build that confidence again, because I have struggled with it for a long time.”