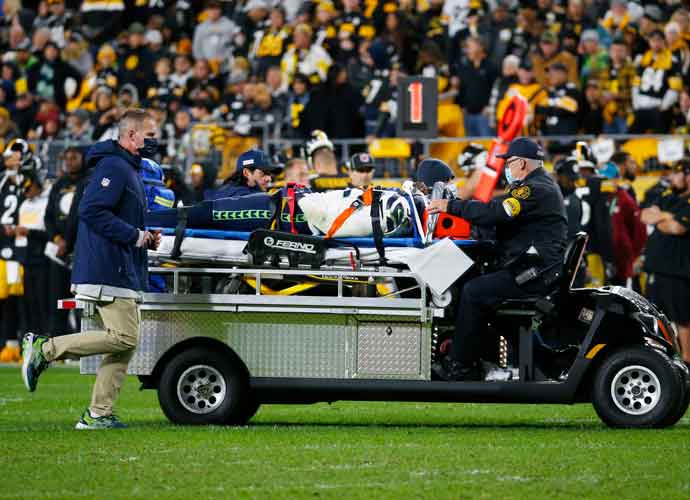 PITTSBURGH, PENNSYLVANIA - OCTOBER 17: Darrell Taylor #52 of the Seattle Seahawks is carted off the field after an injury during a game against the Pittsburgh Steelers at Heinz Field on October 17, 2021 in Pittsburgh, Pennsylvania. (Photo by Justin K. Aller/Getty Images)

With the game tied at 17 with just over three minutes remaining, Taylor’s suffered a neck injury that was difficult to catch live, though replays show that he was uncomfortably caught underneath Steelers guard Trai Turner.

The Seahawks leader in sacks was subsequently taken off the field on a stretcher and rushed to the University of Pittsburgh Medical Center’s trauma center.

“He was so mad at having to be taken off the field like that,” said Seahawks coach, Pete Carroll. “He wanted to get up. They wouldn’t let him do it because they had to do all the secure methods to take care of him and all that. He didn’t want any part of that.”

Fortunately, Taylor was able to move his extremities and is set to fly back to Seattle with his teammates.

Seahawks DE Darrell Taylor was carted off the field after suffering an injury late in the fourth quarter.

Both teams gathered around to make sure he was OK. pic.twitter.com/xLUFiSB68u

Read more about:
Darrell Taylor NFL news Seattle Seahawks
Listen to the uInterview Podcast!
Get the most-revealing celebrity conversations with the uInterview podcast!