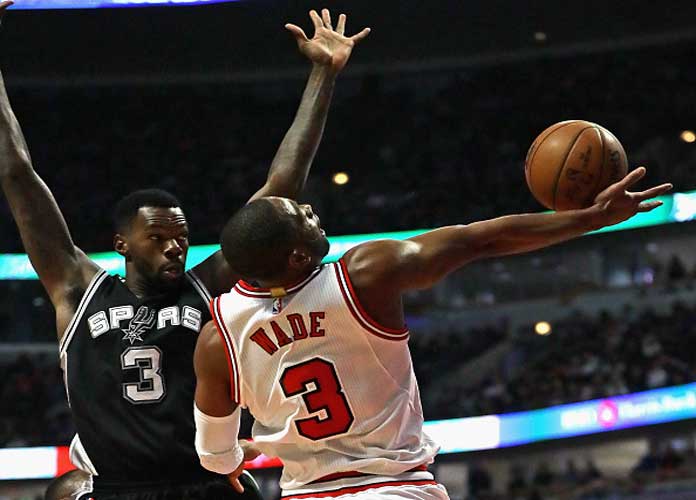 CHICAGO, IL - DECEMBER 08: Dwyane Wade #3 of the Chicago Bulls tries to get off a shot after being fouled by Dewayne Dedmon #3 of the San Antonio Spurs at the United Center on December 8, 2016 in Chicago, Illinois. (Photo by Jonathan Daniel/Getty Images)

One of the NBA’s smaller market teams has made some sneakily good free agent signings over the weekend to an already promising, young roster.

The Kings are coming off a season where they finished with a record of 39-43, good for ninth in the Western Conference. The Kings, who have not made the NBA playoffs since 2006, will be looking to break a 13 season postseason drought during the 2019/2020 NBA Season. With the additions that the Kings have made, it is hard to see them missing the playoffs once again.

Barnes, 27, averaged 16.4 points and 4.7 rebounds per game last season after being traded from the Dallas Mavericks to the Kings. Barnes also shot 42% from the field and 40% from three-point range.

Dedmon, 29, is coming off a season for the Atlanta Hawks where he averaged 10.8 points and 7.5 rebounds per game on 49% shooting, including a stellar 38% from three-point range, a surprise considering Dedmon is a center. Dedmon moves well for a center, fitting in with the Kings fast-paced offensive system.

Ariza, 34, spent time with both the Pheonix Suns and the Washington Wizards last season. Ariza is one of the best 3-and-D players in basketball. Ariza averaged 14.1 points, 5.3 rebounds, and 1.2 steals per game while with the Wizards.

Trevor Ariza has agreed to a 2-year, $25M deal with the Kings, per @ShamsCharania pic.twitter.com/xYnFBzJFas

These additions add on to an already impressive young core for the Kings. Led by Fox, the Kings also bolster Marvin Bagley III, Buddy Hield, Bogan Bogdanovic, and Harry Giles. Look out Western Conference because there is a new, young contender in town.

The Sacramento Kings general manager and head coach are on the EXACT same page.

Dejounte Murray Traded To Hawks, Contract Still Up In Air

James Harden Opts Out Of Contract, Plans To Remain With Philadelphia