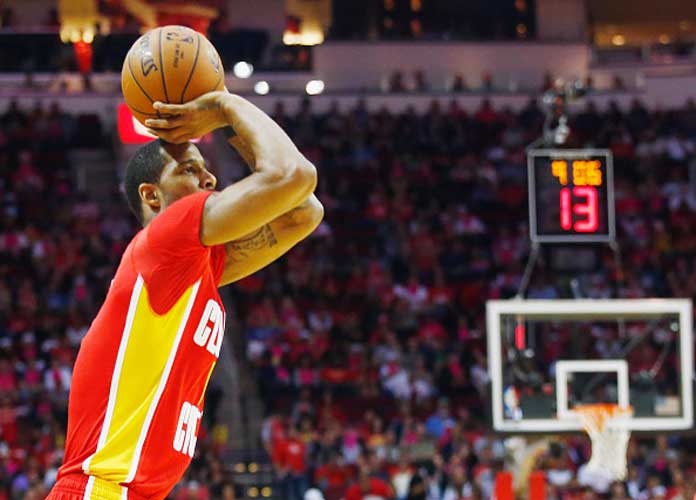 HOUSTON, TX - MARCH 16: Trevor Ariza #1 of the Houston Rockets shoots the basketball against the Los Angeles Clippers during their game at the Toyota Center on March 16, 2016 in Houston, Texas.

Lakers Are Pursuing Suns’ Trevor Ariza, Rumored To Have “At Least 8 Teams” Interested

Among several teams interested in Phoenix Suns swingman Trevor Ariza are the Los Angeles Lakers, who have made it clear that they would like for him to rejoin the team.

According to several reports, however, the Lakers are nowhere close to a deal, as the team has Kentavious Caldwell-Pope and a bench player to offer as collateral.

Phoenix and Los Angeles have both engaged in trade discussions that involve sending Pope to a third team, as the Suns are asking for a “playmaking” point guard and a draft pick in return for Ariza. Ariza signed a $15 million deal with Phoenix this offseason after a stint with the Houston Rockets and would be a valuable asset at the wing to a team in need of shooting depth such as Los Angeles.

Many NBA fans reportedly began Photoshopping Ariza into a Lakers jersey shortly after the news broke:

There are already a lot of photoshops of Trevor Ariza in a Lakers jersey, it turns out. pic.twitter.com/yJ76CcOJw4

The Lakers, in desperate need for such depth at the wing, could use Ariza should they find themselves in the postseason in a cutthroat Western Conference. An elite defender on the perimeter, Ariza can provide rigidity to a young Lakers core that has struggled with Caldwell-Pope, who hasn’t been the defender Ariza has proved to be. Both the contracts of Caldwell-Pope and Ariza expire at the conclusion of the 2018-2019 season, so an upgrade at the position is something the Lakers can benefit from at a low risk.

Ariza, who is averaging 9.7 points, 5.5 rebounds and 3.3 assists this season, is undergoing to the worst stretch of his career. This is due in part to his abysmal Suns teammates, who have lost 22 of 26 games to begin the season.