Paul George Says Lakers Were 'Pissed' At Him For Not Meeting With Magic Johnson: 'I Didn't Want To Waste People's Time' - uSports.org 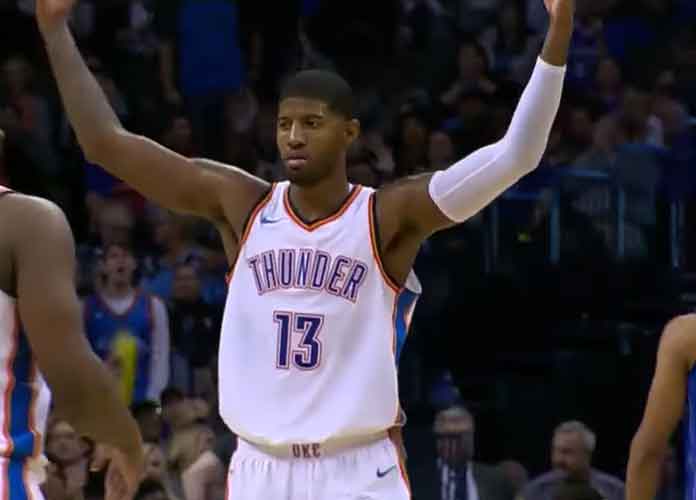 Paul George Says Lakers Were ‘Pissed’ At Him For Not Meeting With Magic Johnson: ‘I Didn’t Want To Waste People’s Time’

Oklahoma City Thunder star Paul George revealed this week that the Los Angeles Lakers were “pissed” at him for not letting the team meet with him almost two months ago.

“L.A. was pissed at me,” said George on the Short Story Long podcast. “I didn’t give Magic [Johnson] a meeting, which I understand. But at that point, I knew I wanted to give it another shot [in Oklahoma City].”

“I didn’t want to prolong it and waste people’s time,” the 28-year-old small forward added.

The Thunder acquired George via a trade with the Indiana Pacers in July 2017, after the five-time All-Star told Indiana he didn’t want to re-sign with them as a free agent. Several NBA fans and pundits had speculated George could leave Oklahoma City for the Lakers at the end of this season, as he was born and raised in Los Angeles County. According to some reports, George even grew up rooting for the Lakers and Clippers and was a big fan of Kobe Bryant. However, the forward agreed to stay with the Thunder just days after free agency began on July 1.

Along with the newly-acquired LeBron James, George was one of several veteran NBA stars who were rumored to join the Lakers this offseason and form a so-called “super team.” George recently said super teams are necessary in the NBA now more than ever in order to dethrone the Golden State Warriors as one of the most dominant teams in the league, the way the Chicago Bulls dominated the NBA in the 1990s thanks to superstars like Michael Jordan and Scottie Pippen. In recent years, the Warriors have enjoyed great success — including a 28-game win streak in 2014-2015 and a record 73 victories in 2015-16 — thanks to top players like two-time MVP Steph Curry, Kevin Durant and Andre Iguodala.

On July 1, George shared this Instagram photo of himself with Thunder teammate Russell Westbrook:

George finished last season averaging 21.9 points, 3.3 assists and 5.7 rebounds per game. He played in 79 games. Oklahoma City was eliminated by the Utah Jazz in six games in the opening round of this year’s playoffs.