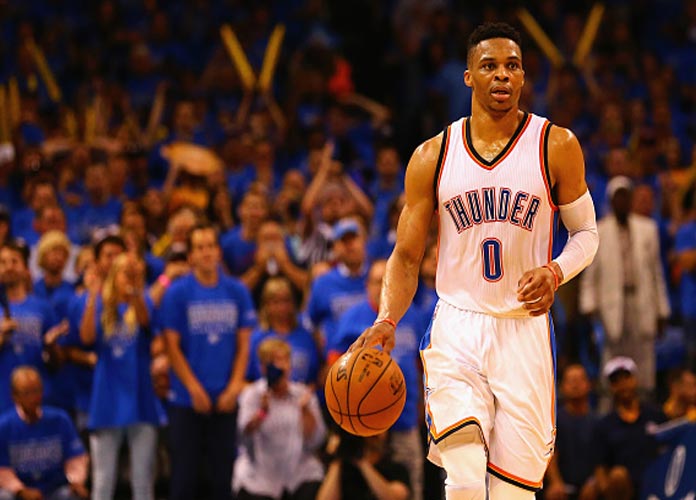 Mitt Romney made an appearance at Monday night’s Game 4 playoff contest between the Utah Jazz and Oklahoma City Thunder in Salt Lake City, and he couldn’t help but take a jab at Russell Westbrook.

The former Governor of Massachusetts, who is an avid Jazz fan, was wearing the team’s jersey while sitting court-side, and after Westbrook drew his fourth foul less than two minutes before halftime, Romney decided to poke fun at the MVP. Romney, the 2012 Republican nominee for president, was seen smiling, clapping and holding up four fingers while visibly saying “That’s four” after Westbrook picked up the foul.

This game has everything, including Mitt Romney taunting Westbrook lol pic.twitter.com/dGmu2v9RFy

Westbrook, whose fourth foul came after he aggressively charged Ricky Rubio, finished with 23 points and 14 rebounds in the Thunder’s 113-96 loss. Utah leads the first-round series 3-1, and Game 5 is set for Wednesday at 9:30pm EST in Oklahoma City.

Photos on social media quickly revealed Romney was wearing a personalized Jazz jersey with the number 5 and his last name on the back. Utah’s David Stockton currently sports the No. 5 on the team’s roster.

Romney lost the Utah GOP’s Senate nomination on Saturday, which means he will have to compete against state representative Mike Kennedy for the seat in a primary in June. Romney is looking to replace long-standing Republican Senator Orrin Hatch. According to CNN, Romney finished second in the second round of voting with 49.12 percent, while Kennedy led with 50.88 percent.