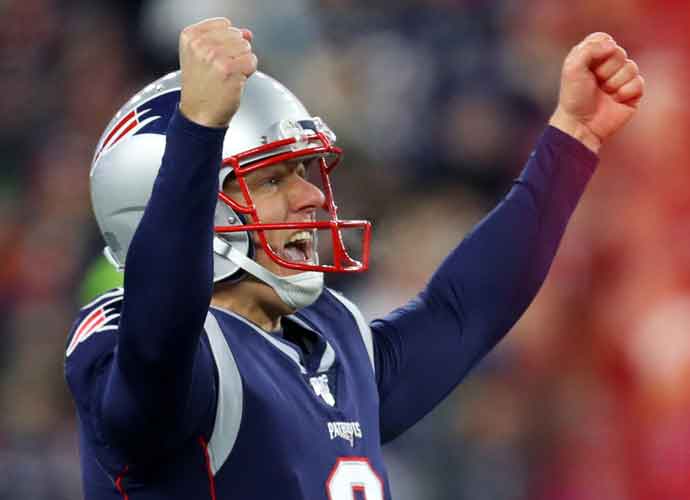 FOXBOROUGH, MASSACHUSETTS - DECEMBER 21: Nick Folk #2 of the New England Patriots celebrates after scoring a field goal against the Buffalo Bills at Gillette Stadium on December 21, 2019 in Foxborough, Massachusetts.

As a Patriots fan one of my most vivid memories of watching them play for the past 15 years (besides the three Super Bowls) is when Stephen Gostkowski went from an incredibly consistent kicker to mediocre almost over night.

It was during the 2015 AFC Championship that the Patriots played against Peyton Manning‘s Broncos and while I can’t remember the exact play, I remember it being the first time Gostkowski missed an extra point. It was shocking, other than my Dad, Gostkowski has been the most consistent thing in my life. But from there it was all down hill.

After five more painful years where you feel unsettled during every extra point and field goal over 40 yards, the Pat’s benched Gostkowski last year “due to an injury” and used a shaky rotating cast of free agent kickers but never managed to find the right fit. With the 2020 season just three weeks away, that still seems to be the case.

“I think we’re in position, hopefully, to string some good days together and have a lot of little things start to fit together in the overall big picture,” Bill Belichick said. The Patriots have brought back the kicker that they landed on last year Nick Folk to compete with rookie Justin Rohrwasser for the starting position. While Folk was consistent last year, he wasn’t spectacular – you can’t really trust him beyond 40 yards.

The most underrated part of football team is a reliable kicker that you never have to worry about and can hit clutch kicks. It is crippling when you have a game-winning drive down two or score a touchdown to bring the score to one and your kicker comes on the field and shanks a 35-yard extra point or field goal then runs of the field before the fans in the stadium can process what happened and start pelting him with plastic beer cups. Unfortunately, it’s an experience that most teams have to endure – just ask the Bears, Ravens, Bills and Vikings.