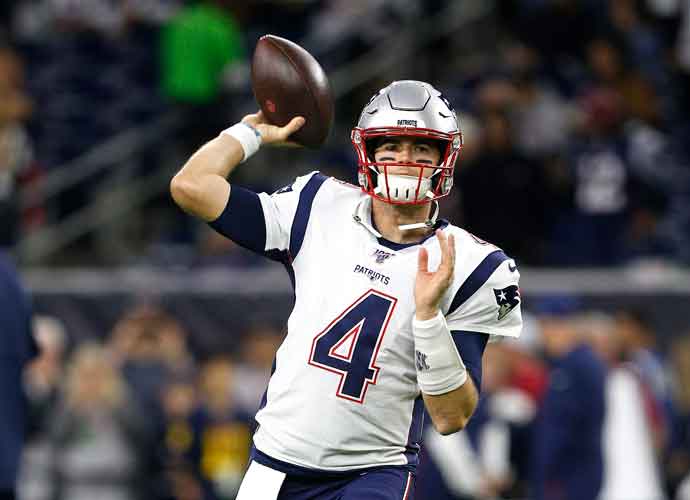 HOUSTON, TEXAS - DECEMBER 01: Jarrett Stidham #4 of the New England Patriots warms up prior to the game against the Houston Texans at NRG Stadium on December 01, 2019 in Houston, Texas.

“To me, the best thing for Stiddy was that he had to go against our defense every week. He didn’t have it easy,” McCourty said Sunday on his Double Coverage podcast. “I love his poise. I would be faking a blitz sometimes and we’d make eye contact and he’d just start smiling and laughing.”

He later added, “To me, there were weeks where he was just on-point. And those were some of our best weeks as a defense, mainly because Stiddy ate us up in practice leading up to the game, and I think put more pressure on us. So I really admire just how hard he works, and then I’ve got to know him off the field as well. He’s a really good guy. Young guy, but very mature. He’s married. I think the Stidhams are going to be in New England for a long time.”

The 23-year-old was drafted in the fourth round in 2019 out of Auburn and was able to impress coaches enough to move ahead of Brian Hoyer on the depth chart. Hoyer has since re-signed on a one-year deal and fifth-year quarterback Cody Kessler will remain the third quarterback on the roster.

McCourty revealed that Bill Belichick would regularly test Stidham to run opposing team’s offenses and throw different defensive packages at him to evaluate his ability. McCourty also mentioned that the defense would comically talk trash to Stidham during those sessions.

McCourty later praised Hoyer’s leadership skills following the Patriots’ decision to re-sign the 34-year-old veteran quarterback who may take on a mentor role for Stidham.

“He has a veteran presence. He’s played on multiple teams. He knows our offense very well,” McCourty said on the podcast. “I think he’ll bring experience and knowledge, and if he has to go out there and play, he’s going to compete at a high level. Or if it’s coaching up young quarterbacks, I think he’s a guy that’s going to be very necessary to have in our locker room.”